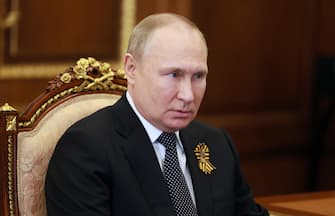 As the war in Ukraine continues, we continue to talk about the health conditions of Russian President Vladimir Putin. The rumors are different, some refer to an intervention to the Kremlin leader for a cancer. Several testimonies, then, tell of how the deterioration of his health conditions is also evident in the public releases and in the videos that are released

WATCH THE VIDEO: Putin: NATO threatened us, our preemptive attack

There Russiaanyway, continue to deny that Putin is suffering from health problems

One of the latest rumors about the conditions of the Russian president, reported by Francesco Semprini on The print, speaks of an intervention. The journalist cites “informed sources” and refers to “an alleged hospitalization and intervention to which Vladimir Putin is subjected suffering – it seems – from cancer ”

The article from La Stampa

To try to keep the maximum confidentiality, he explains The print, the operation would be scheduled at night, “between 1 and 2”. As for the date, he reports that it may have been carried out on the night between 16 and 17 May. The phases of hospitalization would have been treated in detail, with the medical staff already alerted days before and the intervention entrusted to Russian doctors “specialists that have passed a control on different levels ”

Semprini also explains how, to cover up Putin’s alleged absence and make it appear that he has control of the country, a “substitute” plan would have been devised. The Russian secret services would have predicted a “coverage” of at least ten days. Two double they would be ready to deal with public appearances. Different video of the president intent on working, attending meetings or signing documents, would have already been registered

McDonald’s leaves Russia, from the opening of the first store in 1990 to the farewell. THE PHOTOS

The print he then cites “some sources collected in the Telegram channel of counter-information allegedly managed by a former general of the Russian foreign secret services known under the pseudonym of ‘Viktor Mikhailovich'”: according to what they report, “within five days it will be possible to have an idea of ​​the outcome of the intervention“. According to the same sources, in reality the management of power has already been entrusted to “Nikolai Patrushev, former head of the federal police, considered a Moscow hawk, for all the absence of Putin” (in the photo, Putin with General Gerasimov)

Head of the 007 of Kiev to Sky News: Putin is seriously ill with cancer

The journalist’s sources speak of “evidence” that they would testify a “rush to the Russian president’s clinic about a week ago”, at night, because “he was very ill”. The Kremlin leader then missed the annual ice hockey match in Sochi in the days following

Several witnesses underline how some signals on Putin’s conditions can also be found in the parade last May 9th: “The dragging of the right leg, the crooked arm, the pale face, the exhausted look”. Signals that, according to some, would also be evident in some videoslike the one in April of Putin’s meeting with Russian Defense Minister Sergei Shoigu, or the more recent one with some marks on his face

According to some, Putin would have the Parkinson’s disease. According to others, severe back problems. Still others believe it has the cancer. As reported The print, the Russian newspaper “The Project”, which specializes in investigative journalism, “said that Putin has been seen by an oncologist specialist at least 35 times in recent years” and has become “paranoid about his health”. In a recording obtained by the magazine New Linesexplains The printan oligarch near the Kremlin is heard saying that Putin is “very sick with a blood tumor”

Recently, he has also been speaking publicly about Putin’s health conditions Kyrylo Budanov, head of Ukrainian intelligence, in an interview on May 14 with Sky News. He did not disclose any evidence or details, but did report that Putin would be “seriously ill with cancer and other diseases“. He added that a coup d’état is already underway in the country to remove the Russian leader