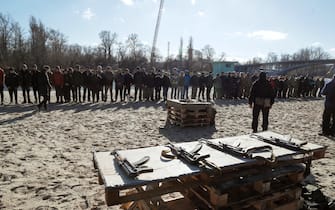 “A few more days and the Russia will attack Ukraine“Once again, the United States is raising the alarm, this time through the US Secretary of State Anthony Blinken. Speaking at the United Nations Security Council, chaired by Russia, Blinken said that Moscow was preparing “a pretext“To justify the invasion, for which the main steps are already planned: aerial bombardments, power outages, soldiers and tanks on the Ukrainian capital, Kiev

WATCH THE VIDEO: Ukraine crisis, skyrocketing tension in the Donbass

The Russian plan to take Ukraine would therefore start from a pretext to motivate the attack. Moscow “could theatrically convene emergency meetings“to” respond “to false flag operations before starting the offensive, said Blinken (pictured)

The false justifications envisaged by the Russian plans could be “a terrorist attack on Russian soil, the discovery of a mass gravean attack with chemical weapons or an offensive with drones on civilians ”

According to the US secretary of state, Russia would focus first on the interruption of communications and electricity, then on aerial bombing and finally “theground attack“, with” tanks and soldiers “advancing on” a series of targets already identified, including the capital Kieva city of nearly three million inhabitants ”

Russia’s sanctions on Europe, from the price of bread and pasta: the repercussions

Moscow would also be preparing to target “specific groups of Ukrainians. “The reference could be to the attack plans revealed by the German newspaper Bildwhich would suggest how the Kremlin intends to capture and lock up potential “camps” leader from the Ukrainian resistance

Twitter – Ministry of Defense of the Republic of Estonia

Even the Ministry of Defence ofEstonia points the finger at Moscow, posting one on Twitter map of Ukraine where the sensitive points that Russia would hit in the event of an attack are marked. “They are the aims identified by Russian intelligence that, if neutralized, could interfere with the command, recovery and procurement of the Ukrainian armed forces and the energy supply of Ukraine. Russian intelligence has similar lists for other European countries“, reads a report published by the Estonian ministry

Blinken’s claims are none other than unfounded accusationsreplied the Russian deputy foreign minister Sergey Vershinin (in the photo), according to which the military scenarios evoked by Blinken are “dangerous, deplorable“and they do nothing but increase the tension that is consuming international diplomacy

“I think we have had enough speculation about this”, added Vershinin. The US ambassador to the UN replied to the speech. Linda Thomas-Greenfield (pictured, with Blinken), according to which Blinken’s claims are not speculation but deal with “facts” and that Washington “will continue to intensify diplomatic efforts” to avoid conflict

Blinken then explained that the hope of the United States is that, “by exposing these plans in detail, showing them to the world”, it will be possible to influence Russia to “change routeabandon that of war ”

“We’re here for prevent a warnot to initiate it, “Blinken warned, saying he would be” happy “if his predictions were proven wrong.