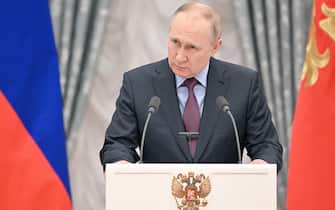 While the tension between Russia and Ukraine continues to grow, following the decision of the Moscow government to recognize the separatist republics of Donbass and the announcement of military support “if necessary”, Vladimir Putin is back to talk about a possible diplomatic solution to the crisis

WATCH THE VIDEO: Ukraine crisis, because everything started from the Donbass

Putin, speaking in a televised speech on Defender of the Fatherland Day, said Russia is ready to find “diplomatic solutions” with Kiev and the West on the Ukrainian crisis. However, the Kremlin tenant also added that the your country’s interests and security are “non-negotiable”

“Our country is always open to dialogue direct and honest to find diplomatic solutions to the most complex problems, ”Putin said. “However, the interests and the safety of our citizens they are not negotiable for us”

The history of Ukraine

Yesterday the Kremlin leader had dictated to the West and to Ukraine itself three conditions to avoid a military escalation in the area: the government of Kiev should withdraw its application for NATO membership, demilitarize the country and recognize theannexation of Crimea to Russia

Moscow’s plans for invasion: the assumptions

However, requests that seem unacceptable for Ukraine and also for the West. President Volodymyr Zelensky, after having already said of “do not be afraid”Of Russia, decided to recall reservists to the army for an extraordinary period in the face of the threat of invasion and asked for more weapons to be sent from the countries of the European Union and the United States. Meanwhile, US Secretary of State Antony Blinken has scheduled meeting with Russian counterpart Sergey Lavrov canceled

The latest news on the crisis live

Following the Russian recognition of the breakaway republics in the Donbass, the European Union and the United States have a first package of sanctions approved against people, entities and banks involved in various capacities in the military escalation. Western countries said they were ready to further measures in case the situation on the ground gets even worse

The first EU and US sanctions are launched against Russia

“The sanctions they won’t solve anything with Russia ”, commented the Russian ambassador to the United States, Anatoly Antonov. “It is difficult to imagine that Moscow will change foreign policy under the threat of restrictive measures”

What will happen to the Donbass separatist republics

“I don’t remember a single day our country lived without undergoing any restrictions from the Western world, ”added the Russian diplomat. “We have learned a work in such conditions. And not only survive, but also develop our state ”

Borrell: no more shopping in Milan for sanctioned Russians

Anatoly Antonov’s words sound like a warning to Washington: “There is no doubt that the sanctions imposed against us they will damage the financial and energy markets global. The United States will not be excluded, ordinary citizens will suffer all the consequences of the price increase ”

Why Putin blames Lenin for the creation of Ukraine

In addition to the sanctions imposed on Moscow, Germany yesterday decided to to stopat least for the moment, the commissioning of the Nord Stream pipeline 2which directly connects Russia to Berlin