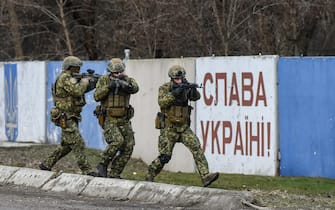 WATCH THE VIDEO: Ukraine crisis, the reasons for the possible conflict

Negotiations involving world powers and NATO, which discuss with each other but above all with intercoluter number 1: the Russian president Vladimir Putin, a former KGB official in his fourth term at the helm of the country. For Moscow, the main crux is the entry of Kiev into NATO, and Putin said: “For 30 years we have been told that NATO will not expand towards Russia, instead it has happened. And they tell us that Ukraine is not yet ready. to join NATO. But whether this happens tomorrow or the day after tomorrow, nothing changes for us. We want to resolve this question ”

All the updates on the Russia-Ukraine crisis

The other interlocutor of many of the world powers is the Ukrainian president, Volodymyr Zelensky. The 44-year-old former actor claims that joining NATO would “guarantee the security” of his country and maintain constant contact with allies, while arguing that it was a “big mistake” to move Western embassy staff from Kiev.

Wind of war between Russia and Ukraine, what is Italy at risk?

Another face of the crisis between Ukraine and Russia is Sergei Lavrov, Russian foreign minister since 2004. Putin’s most loyal, his almost systematic opposition to Western initiatives – such as his repeated condemnations of NATO’s eastward expansion – earned him the epithet of Mr. Nyet in the chancelleries (Mr. no). Lavrov said the news from the West about a Russian invasion of Ukraine is “media terrorism”

Russia-Ukraine: gas, NATO and twenty separatists. The reasons for the possible war

Among Putin’s toughest opponents is the president of the United States Joe Biden, which has repeatedly threatened sanctions and reactions in the event of an invasion of Ukraine by Moscow. The tenant of the White House, in the many talks he had on the crisis, however, also always reiterated “the importance of continuing to pursue diplomacy” to avert a war. Speaking with Putin, he told him that if Russia invades Ukraine, the United States and its allies will respond “firmly” and impose “severe costs” on Moscow.

A central role in the crisis is played by NATO, with its general secretary Jens Stoltenberg. To consider a serious de-escalation on the Russian side, says Stoltenberg, NATO wants to see the withdrawal of heavy vehicles and military equipment in the areas bordering Ukraine, not just that of men. “The process of accumulation of Russian forces has been going on, with ups and downs, since last spring”, basically the Russians leave the military infrastructure in the designated areas, and then “quickly bring the men back into position” when deemed necessary.

The German Chancellor also participates in the diplomatic negotiations Olaf Scholz. Considered by some observers too hesitant on the Ukraine question – so much so that the hashtag #woistscholz was born on social media, or where is Scholz? -, after the last meeting with Putin he said that the security of Europe “cannot be built against Russia”, and to those who asked him if a moratorium on the possible entry of Ukraine into NATO could be hypothesized, he replied: ” I was clear that on some positions there is no possibility to negotiate ”

However, a former German chancellor, the 78-year-old, also falls into the picture Gerard Schroeder, whose figure is creating some tension in Germany. The former chancellor was in fact a candidate for the supervisory board of the Russian giant Gazprom, is a close friend of Putin and has been on the payroll of various Russian energy companies since 2005, including Nord Stream 1 and 2. Moreover, in recent days more Schroeder has sometimes spoken out in favor of Russia on the Ukrainian dossier

Several talks and face to face with world leaders held by the French president Emmanuel Macron, who also flew to Moscow on February 7 to see Putin. To the Russian president, Macron reiterated the “determination to react” of Westerners in the event of a military operation, but according to the Elysée both “have expressed their willingness to continue the dialogue on the Minsk agreements and the security of Europe”