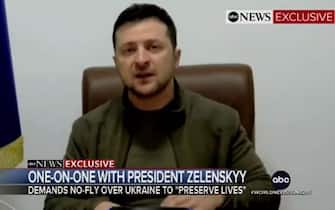 There are openings to be able to reach a compromise and put an end to conflict between Russia and Ukraine. So far the peace talks between the delegations of the two countries have not brought concrete results. However the Ukrainian president Volodymyr Zelensky (pictured), in an interview with Abc – while speaking of the risk that the conflict will become a “world war” – has put on the table some questions that make us reflect on how and why the conflict could end

WATCH THE VIDEO: Ukraine, what is the Austria model

DONBASS AND CRIMEA – Among the requests that Putin makes to Ukraine and the entire international community is the recognition of the Donbass and of Crimea as a Russian territory. Crimea was unilaterally annexed to itself by Moscow in 2014, while the separatist and pro-Russian republics of Donetsk and Luganskcurrently occupied by the troops of Moscow (in the photo, tanks in the Crimea)

Regarding the Donbass, Zelensky said that “on temporarily occupied territories and pseudo-republics not recognized by anyone but Russia, we can find a compromise on how these territories will live ”

War in Ukraine, the refugee map

“For me it is important to know how people who want to be part of Ukraine will live there. I am interested in their opinion and that of who sees themselves as citizens of the Russian Federation”, continued the Ukrainian president, adding that “we can discuss in this sense, as well as on a compromise on Crimea“

We should therefore find a common point that satisfies both Kiev and the Kremlin. So far, Crimea is recognized as the 22nd republic of the Russian Federation only from North Korea, Cuba, Syria, Afghanistan, Venezuela and Nicaragua

Ukraine, the flags of the pro-Russian separatist republics. PHOTO

Donetsk and Lugansk they were instead recognized as autonomous by Russia on 21 February. No other state has moved in this direction so far, if not theSouth Ossetia, another limited-recognition territory that has declared itself, with Russian backing, independent of Georgia. Unlike Crimea, Moscow has not yet declared the two republics part of its territory, but Putin said theDonbass is “an integral part of Russian history and culture”

Vladimir Putin, from the KGB to the Kremlin: his story

From the Balkans to Ukraine, the conflicts that affected Europe in the Second World War

BORN – Another topic on which Zelensky opened is the entry of Ukraine into NATO. The issue is one of the reasons that Putin has always said were crucial in his decision to launch a “special military operation” on Ukrainian soil.

For years Kiev, aiming to detach itself from the geopolitical influence of Moscow and get closer to the West, has been asking to join theAtlantic Alliance. A request that scares the Kremlin, which would thus find itself bordering on a member state of the rival military organization

What prospects does Ukraine have of joining the European Union?

However, NATO has always excluded “the imminent entry of Ukraine”. Zelensky has now hinted that one can also discuss Kiev’s renunciation of NATO

Zelensky in recent days has also made a formal request for membership to become the 28th member state of theEuropean Union. Putin has not expressed himself, but this does not seem the path of “neutrality” that he is asking for to put an end to the invasion of Ukraine. On this point, for now, not even Zelensky has returned

It is therefore on Crimea, Donbass and the position of Kiev in the international community that the game will be played in the next few days. According to many Putin, who also speaks of “demilitarization”Of Ukraine, would aim not so much to occupy all the Ukrainian territory, but more to establish one pro-Russian political class

The name on the table would be that of Viktor Yanukovych (pictured), former Ukrainian president who took refuge in Russia after the bloody riots in Maidan Square in 2014, when the Ukrainian people – on pro-European pushes – rebelled against his proximity to Putin