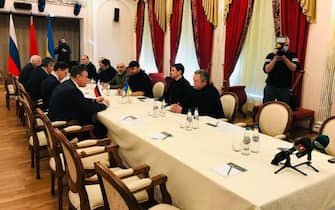 It ended on summit in Gomel between Moscow and Kiev. The Russian chief negotiator Vladimir Medinsky, shortly before the opening of the talks, quoted by Interfax, stated that “the Russian delegation is ready to negotiate with Ukraine as long as necessary to reach an agreement”. Leading the Ukrainian delegation is Defense Minister Oleksii Reznikov

WATCH THE VIDEO: Gomel Summit, Belarusians to Delegations: “You are totally safe here”

The talks started around noon. Minsk tweeted a photo of the headquarters, al Ukraine-Belarus borderin the Pripyat River area

All updates on the war between Russia and Ukraine

In the photo, the Ukrainian Defense Minister Oleksii Reznikov and the head of the Russian delegation Vladimir Medinsky

Ukraine calls for the “immediate ceasefire“and the withdrawal of Russian troops.” The next 24 hours will be crucial for Ukraine, “Ukrainian President Zelensky said in a telephone conversation with British Prime Minister Johnson. (Pictured: Defense Minister of Ukraine)

At the top there is also the Belarusian Foreign Minister, Vladimir Makei (in the picture). Makei welcomed delegations from Ukraine and Russia assuring all delegates that they must feel “completely safe”. “President Lukashenko – added Makei – sincerely hopes that, during today’s talks, it will be possible find solutions to all the problems regarding this crisis ”

On the Ukrainian side of the table are also seated David Arakhamia, leader of Zelensky’s party, Deputy Foreign Minister Mykola Tochytskyi, Ukrainian Ambassador to Great Britain, Mikhailo Podoliak, adviser to the President, Rustem Umerov, one of the three deputies elected in Kiev, Andryi Kostin, deputy head of the trilateral contact group (Russia, Ukraine and OSCE) for a ceasefire in the Donbass

For Russia, alongside Medinsky, are Alexander Fomin, the Deputy Minister of Defense, and Andrei Rudenko, Deputy Foreign Minister and Leonid Slutsky, Head of the Committee for International Affairs (in the photo, Medisnky and Slutsky)

Meanwhile, compacting alongside Kiev, theEurope accelerates with a new barrage of sanctions aimed at striking Russia, whose flights it also closes the skies. And the spokeswoman for the Russian Foreign Ministry protests against this closure, due to which Minister Lavrov will not be able to attend the session of the UN Human Rights Council, in Geneva between today and tomorrow

The arrival by helicopter of the Ukrainian Defense Minister Oleksii Reznikov