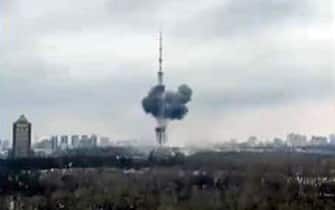 WATCH THE VIDEO: Children walking alone, so you can escape from Ukraine

The news was reported by The Kyiv Independenta Ukrainian English-language newspaper, and subsequently confirmed by the Ukrainian Ministry of the Interior which indicated that, following the attack, the broadcasts were interrupted

As various videos posted on social media show, the area has been hit several times. The tower was not destroyed, but the raid resulted five victims

According to what is learned, there are also five injured

The Simpsons against the war in Ukraine: the cartoon by Matt Groening

The tower is located near the Babyn Yar memorial, where the killing of thousands of Jews during theNazi occupation

War in Ukraine, Zelensky in the European Parliament: “We are experiencing a terrible tragedy”. VIDEO

Commenting on the raid on Twitter, Ukrainian President Volodymyr Zelensky wrote: “To the whole world: What’s the point of saying ‘never again’ for 80 years if the world is silent when a bomb hits the same area as Babyn Yar? There are at least five deaths. History repeats itself “

On Tuesday, the Russian defense ministry he had announced his intention to hit the Security Service of Ukraine and the 72nd Center for Information and Psychological Operations. The Russian agency reported it Tax

The aim, it was said, was to thwart informational attacks against Russia. With the note, the Ministry then invited all citizens “involved by Ukrainian nationalists in provocative operations” and the residents of Kiev who lived near broadcasting stations, to leave their homes

The note from the Ministry reported by Tass

Firefighters at work in the attack area