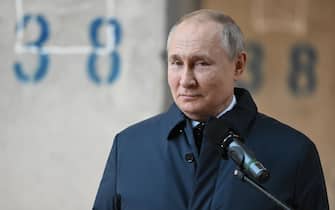 While in Gomel, on the border between Ukraine and Belarus, the first took place negotiations between the Moscow and Kiev delegations since Russia invaded Ukraine, the head of the Kremlin Vladimir Putin – on the phone with French President Emmanuel Macron – he dictated his opinion conditions to stop the conflict

WATCH THE VIDEO: Russia-Ukraine war, the drama of refugees

In the conversation between the two leaders, the Kremlin said, Putin told Macron that a first point on which he does not intend to retreat is the international recognition of Crimea as Russian territory (in the photo, Russian tanks in Crimea)

Crimea had declared itself independent in 2014. Later it was unilaterally annexed to itself from Russia, with a declaration not recognized by either Ukraine or the rest of the international community

Another condition for stopping the invasion of Ukraine, Putin also told Macron, is for Kiev to hire one neutral status

Russia-Ukraine war, Putin calls for the recognition of Crimea

Among the reasons behind the conflict, which began last February 24, there is also the will of Ukraine to join the Born. Desire strongly opposed by Putin, who continues to ask that Kiev stop trying

All video stories from Ukraine

An agreement with Ukraine, reports the Kremlin, quoted by TASS, will only be possible after the “demilitarization and de-Nazification“of Kiev

The Elysée underlined how, during the conversation between Putin and Macron, the former nevertheless undertook to “suspend all attacks on civilians and homes“In Ukraine and” to keep in touch in the coming days to prevent the situation from worsening ”

However, not much has leaked out of the negotiations they are bound to hold Gomelwhich lasted almost six hours, which neither Russian President Putin nor Ukrainian Zelensky attended

Who are the Russian oligarchs close to Putin

There will be a new meeting between the delegations, Medisnky always said, which will be held “in the next few days between Poland and Belarus”

Meanwhile, the European Union and Western countries continue with the sanctions to apply in Moscow, including the freezing of foreign assets of Putin and his foreign minister Lavrov and the isolation of the Russian central bank from the international financial system