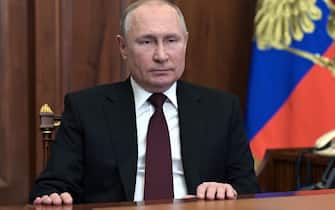 Vladimir Putin would not be happy with how the military invasion of Ukraine is progressing. Specifically, the Russian president would be critical of the work of the Fifth Division of the FSB, the service body in charge of providing information on the invasion, and for this he would have his top executives arrested

WATCH THE VIDEO: Ukrainian war, the effects of sanctions on Moscow

To spread this news – which have no official confirmation – were Andrei Soldatov and Irina Borogan, investigative journalists and among the top Russian intelligence experts. Putin, they say, would have dismissed and placed under house arrest General Serghei Beseda and his deputy Anatoly Bolukhnumber one and number two of the Fifth Division of the FSB

Beseda – very loyal to the president – and Bolukh would have been stopped with theallegation of misuse of funds allocated for operations. The thesis of the two analysts is that, after two weeks of war, Putin realized that he had been misled: intelligencefearing to anger the leader and eager to please him, it would give him what he himself wanted to hear and not the truth (in the photo, the Ukrainian embassy in Moscow)

Thus, according to the two Russian journalists, Putin would have deluded himself that he could take Kiev in a blitzkrieg and rapid regime change, perhaps replacing Volodymyr Zelensky with Viktor Yanukovic, ousted by the Euromaidan revolt in 2014 and in exile in Minsk. Instead, the Ukrainian army turned out to be tougher than expected and civilians are not welcoming Russian soldiers as liberators. A very different scenario from what would have been painted to the president

If confirmed, the arrest of the two 007s would be a particularly painful failure for the Kremlin leader. Putin was director of the FSB and had made the Fifth Division one of the main tools of his international political action. Compared to a sort of praetorian guard of the president, this unit is the branch of intelligence that aims to maintain close ties with the former Soviet republics and prevent them from falling into the Western sphere of influence.

It is the Fifth Division to manipulate the collaborators of the Kremlin scattered on the borders of the former USSR (and not only), to keep the ranks of propaganda and disinformation and to foment the rebellions in the pro-Russian separatist territories that destabilize some former Soviet republics. The Fifth Division was created in 1992 to fill the void left by a series of agreements between Moscow and the former Soviet republics that prevented the SVR, the Russian external intelligence service, from spying inside the territories of the former Soviet states

Having become the arm of the FSB abroad, the Fifth Division department began expanding in 1999, investing in particular a lot of resources in the branch dedicated to Ukraine. Among his tasks are secret political actions, the subversion of elections, psychological operations and the contrast of the movements that oppose the influence of Russia in the territories of the former USSR (in the photo, an archive image of the headquarters of the ‘FSB in Moscow)

In mid-February, as the prospect of a Russian invasion of Ukraine became more and more concrete, some Western secret services had noted that the Fifth Division was committed to coordinating the activities of pro-Russian groups within Ukraine on behalf of the Kremlin. According to the British 007, the plan was for FSB men to overthrow the local governments of major cities, with the help of their local references, immediately after the invasion, in order to make the overthrow of the Kiev authorities quick and relatively bloodless.

So it didn’t go to Ukraine. But the Fifth Divisionin his CV, he already had several major failed operations. The attempt to bring Yuri Rashka, a prominent Moldovan anti-Kremlin politician, to Moscow’s side, did not detach Chisinau from Europe. And in 2004 Raul Khajimba, a pro-Russian candidate in the presidential elections in Abkhazia, supported by Beseda, failed to be elected

Beseda’s arrival in 2009 should have marked a change of gear. But the Fifth Division failed to keep Yanukovic in power in Ukraine after the 2014 riot and the painless annexation of Crimea is believed to be largely due to the chief of the armed forces, Valery Gerasimov. Despite so many investments in people and resources, Beseda’s second attempt has now also failed. AND this time the general seems to have paid a high price for his failure