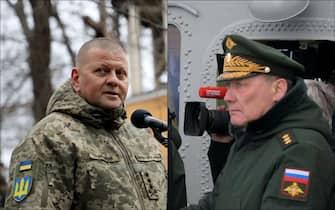 On the battlefield of the war between Ukraine and Russia, there are two key people. The first is Valerii Zaluzhnyi, appointed head of the Ukrainian armed forces nine months ago. The second is Aleksandr Dvornikovto which Russian President Vladimir Putin has entrusted the reins of his deployment

WATCH THE VIDEO: From Syria to Ukraine, who is the Russian general Dvornikov

Ukrainian War, Cecilia Strada: “Arming Kiev is not the only option”

It has earned the reputation of “Iron Man“Ukrainian, an iron general, rejecting the advance of the Russians to the Northwest and preventing them from taking Kiev in a few days. Zaluzhnyi was born in Novohrad-Volynskyi, 240 kilometers west of the capital

Son of a soldier, he has 48 years old And a degree from Odessa. He later attended the military academy in Kiev. Of few words and not interested in appearing, he has climbed all the ranks until he gained full power over the armed forces of Ukraine.

Dvornikov he is 60 years old, he was born in Ussuriysk, 50 kilometers from North Korea. From the first command in the Far East, he has reached the top of the Southern Military District on which the Crimea, the Caucasus and the Black Sea depend

War in Ukraine, the number of dead Russian generals at the front rises

It is also known as “The butcher“for the number of Syrian and Chechen civilians massacred during previous wars. He is accused of having shamelessly used every hybrid weapon in order to achieve the goal

According to reports The Republic, Dvornikov would collaborate with Assad for dirty games, torture and chemical weapons with the aim of destroying all forms of resistance, in order to obtain the established result

From September to June 2016, the general led the grouping of the Russian armed forces in Syria and, during his command, the Russian Air Force accomplished more than 9,000 missions. With him in command the military came in approx 400 settlements, including Palmyra

According to Hanna Shelest, chief military analyst of the Ukrainian think tank Prisma, “having realized that Ukraine will not give up, the Kremlin chose Dvornikov for the war experience e the absence of limits. And unfortunately we have to expect an increasing number of atrocities ”

Dvornikov is considered a “hero of Russia“and the choice of Putin it would have fallen on him precisely because of the experience and successes reported in the previous wars in which he took part. There is also talk of the “Grozny technique“used by the general in the Chechen capital, which consists of sweeping raids without distinction of civilian and military targets. Fear is a repeat in Ukraine