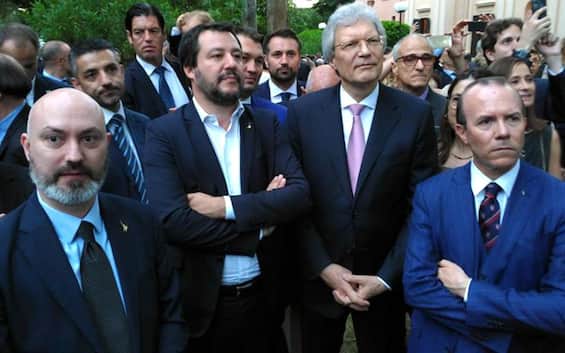 In the request made by the prosecutors, we read that “no concrete element” was found on the secretary of the Carroccio, Matteo Salvini. However, it is likely that the party leader “knew about the negotiations”. The investigators’ statement retraces “40 meetings between suspects and Russians”

The Milan prosecutor’s office has asked for the dismissal of the six people – three Italians and three Russians – who, accused of international corruption, allegedly negotiated a huge oil deal around a table in the Metropol hotel in Moscow in 2018. The request, announced by the newspaper La Verità, was signed by prosecutors Giovanni Polizzi and Cecilia Vassena and endorsed by the deputy prosecutor Fabio De Pasquale. And in the next few hours it will go up to the magistrate’s office and a judge will have to evaluate it. The request concerns the former spokesman of Matteo Salvini and president of the LombardiaRussia association Gianluca Savoini, the lawyer Gianluca Meranda and the former banker Francesco Vannucci, all under investigation for international corruption.

At the center of the investigation, which also passed through rogatory letters in Russia (but without a response from the Moscow authorities), there was an alleged negotiation, which took place at the Metropol hotel in Moscow with a meeting on 18 October 2018, between the three suspects and as many alleged Russian intermediaries on an oil deal which, according to an audio recording, should have had the aim of feeding the League’s coffers with 65 million dollars. Unsuccessful negotiation (no traces of money transfers were found) of which an audio file exists in the Public Prosecutor’s Office and first ended up on the web.

Three extensions on the investigation, then the expiry of the terms

With searches and seizures, a photo of a sheet with the details of the agreement was also found in the cell phones of Savoini, Meranda and Vannucci. The note contained presumed percentages to be divided between the League (4%) and the Russian intermediaries (6%) on a consignment of oil worth one and a half billion dollars. The Prosecutor had asked the Russian authorities to be able to hear some people in the minutes, including the alleged intermediaries identified. Request left unanswered. After three extensions of investigations and after the expiry of the terms for investigating, the request for filing arrived. Ilya Andreevich Yakunin and Andrey Yuryevich Kharchenko were present at the meeting at the Metropol, the latter a former secret service agent and both apparently linked to far-right ideologue Aleksandr Dugin and Vladimir Pligin, a politician close to President Vladimir Putin. And also Yury Burundukov, who is allegedly linked to the oligarch Konstantin Malofeev.

The prosecutors of Milan: “No concrete elements on Salvini”

In a press release, ready yesterday and released only today, on the request for dismissal of the Metropol case, the Milan prosecutor Marcello Viola underlined that regardless “of any assessment regarding the fact that the secretary of the League Matteo Salvini”, never investigated in the investigation, “were possibly aware of the negotiations carried out by Savoini, Meranda and Vannucci, aimed at ensuring important financial flows to the party” it is necessary “to highlight that no concrete elements have emerged regarding the fact that the same has personally participated in the negotiations or in any case made a causal contribution to it”.

In the six-page press release, we read that “no indicative element was acquired of the fact” that Salvini “had possibly been made aware of the intention to allocate a portion of the sum obtained from the transaction to Russian mediators so that they would remunerate Russian public officials” . No notice of crime was filed against him and no investigative activity was carried out against him. The prosecutor goes over the elements of the filing request, not yet filed with the lawyers of the suspects. “Since the sale and purchase transaction” on the oil consignment has not been completed, the prosecutor writes, “not even at the level of exchange of contractual documents, it does not appear possible to state, with adequate certainty, whether it is Ets”, a company of the Eni group, “or other different entity, would actually have borne the disbursement necessary to allow the formation of a margin intended for the illegal financing of the Lega party”.

In the absence “of conclusive elements regarding the identity of the recipients of the sums – the press release continues – deriving from the oil transaction, and the public role of the beneficiaries, the dispute” of international corruption “does not seem concretely configurable”. It remains to be noted, it continues, “in relation to the residual possibility of contesting the hypothesis of attempted illegal financing by the Lega party (Article 7 of Law 195/1974), that the behaviors that emerged have not achieved connotations of concreteness and effectiveness suitable to achieve, at least potentially, the purpose”.

The Milan prosecutor’s office: 40 meetings between suspects and Russians reconstructed

The investigation into the so-called ‘Metropol case’ “was able to reconstruct about 40 meetings of the suspects with each other and/or with representatives of the Russian counterpart held in the period between 19.4.2018 and 8.7.2019 both in Italy (between Milan and Rome) and in Moscow, as well as countless telephone contacts and exchanges via e-mail and web platforms”, write the prosecutors of Milan Giovanni Polizzi and Cecilia Vassena. The investigations also revealed, we read, that three Russians “Yakunin, Karchenko and Dugin participated in the negotiations for the sale of petroleum products as representatives of senior members of the Russian establishment, who allegedly undertook to favor the conclusion of the operation both with the aim of ensuring financial support to the Italian Lega party for Salvini premier, and in view of an economic remuneration promised to them, again through Yakunin, Karchenko and Dugin, by the current suspects”, i.e. Gianluca Savoini, ex spokesman for Matteo Salvini, the lawyer Gianluca Meranda and the former bank Francesco Vannucci.

The press rumors have interrupted the developments of the story

However, “the disclosure in the press that took place two weeks later, regarding the existence of negotiations, conducted by representatives associated with the League, aimed at obtaining funding through oil trades with Russia, had the effect of interrupting any substantial development” of the deal on oil trading. This is one of the elements that led to the request to archive the file. The investigations, the prosecutors continue, “have ascertained how, starting at least from March 2018, the group formed by Savoini Gianluca, Vannucci Francesco and Meranda Gianluca has strongly activated in order to conclude commercial transactions with Russian suppliers of petroleum products with the objective of obtaining large sums of money to be allocated, once the costs for mediation have been deducted, to finance the Lega political party for Prime Minister Salvini, with a particular focus on the economic commitments that the political formation would have had to face in view of the campaign for the European elections and administrative meetings held in 2019”.

I prosecutor: “Transfer of funds has not been completed”

According to the investigations by the Gdf, the total amount of “brokerage profit” on oil trading “would have been equal to approximately 63,000,000 dollars”. The subsequent “transfer of the funds intended for the League, should have” taken place “according to the intentions expressed” by the suspects, it continues, “through a shielded entity to be established for the purpose in foreign territory, probably in London, guaranteed by a contract of trust in the name of Vannucci”. The further developments of the investigations “ascertained that the planned operation was not concluded, probably due to the refusal interposed by the CEO of Rosneft (oil company controlled by the Russian government, ed.) Igor Sechin, who would not have given his consent for the excessive size of the discount, requested by the Euro Ib bank on the basis of the agreements entered into between the Italian and Russian negotiators, assuming that it could conceal an illicit remuneration for Russian officials”.

“It is probable that Salvini knew about the negotiations”

From the investigations into the Metropol case “it appeared likely that Matteo Salvini was aware of the negotiations carried out by Savoini, Meranda and Vannucci” to “ensure important financial flows to the party, and moreover it seems unreasonable to assume that operations of this magnitude could be carried out without a endorsement of the political leaders” even if “concrete elements have never emerged on the fact that the secretary of the League personally participated in the negotiation” which never went through, or “provided a contribution”. For the Milanese prosecutors “there are also no elements indicative of the fact that (…) he had been made aware of the intention to allocate a portion of the sum obtained from the transaction to Russian mediators so that they could remunerate Russian public officials