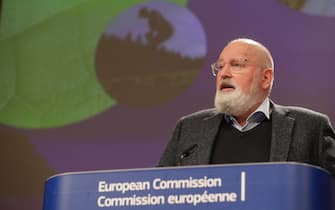 Twelve member countries of the European Union have been struck by “from the one-sided cut“Of the supplies of gas coming from Moscow. Ten of these have issued a “Initial warning” of alert for supplies: the danger of a “total interruption” in supplies from Russia “is now more real than ever”. It is the alarm raised by Frans Timmermans (pictured), Vice-President of the European Commission, during a speech at the European Parliament

WATCH THE VIDEO: Russian gas almost -50% and now hydroelectric is suffering from drought

Timmermans specifies that “the current fill levels of gas supplies “remain in any case higher than 50% of total capacity, “well above last year”

The head ofInternational Energy Agency, Faith Birol, however, invites us to prepare for the worst case scenario in view of next winter. “Europe should be ready in the event that Russian gas is completely cut off, “he said Financial Times

Birol thinks the temporary is positive increase in coal production adopted as an emergency measure among EU countries: it will at least help to preserve gas supplies for heating in the coming months

It is still not entirely clear which countries have begun to raise the alarm level for the Russian gas cut. Looking at the decrease in flows in the last few weeks, there could be one among them Italy, Sweden, Austria, Denmark, the Netherlands, Slovakia and France. In recent months, Moscow had already cut off gas to Finland, Poland and Bulgaria. Clear and not very comforting words come from Germany

The Vice-Chancellor and Minister of the Economy spoke directly Robert Habeck. “Gas is immediately in Germany a good poor“He said, announcing thealarm activation in the gas emergency plan. And therefore: Germany will have to “reduce the use of gas already in the summer“, because the months are” deceptive “, but winter” arrives and we have to fill the deposits ”

“We are in one economic confrontation with Russia and the gas is used as a weapon“, said the vice-chancellor, according to which” all the political measures to ensure that there is enough gas. “Habeck still hopes that gas rationing will” never “come about in Germany, saying however that he cannot” completely rule out such a scenario ”

European nervousness is unleashed on the very first day of European Council, which will take place between today and tomorrow. Also on the table of leaders gas price cap. The reference to the imposition of an energy price cap has entered the latest version of the draft summit conclusions

In the text, viewed byHandle we read that the Council “in contrasting Russia’s use of gas as a weapon and recalling the conclusions of May 31calls on the Commission to pursue its efforts insecuring energy supplies at affordable prices“. The conclusions of the May summit in turn invited the Commission to explore options to keep prices down, including a temporary price cap

Our Minister of Ecological Transition Roberto Cingolani (in the picture) remember how “the European price cap was a proposal from Italy in unsuspected times and which has had very strong resistance, but perhaps it is the only way forward “. It is used to avoid uncontrolled” peaks “in the preparation of prices towards consumers. It is necessary” to store 10 billion cubic meters of gas during the summer to be quiet in winter ”