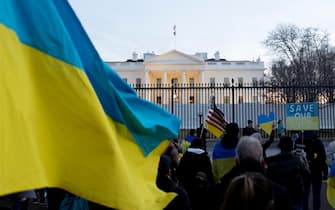 Demonstrations to ask for peace in Ukraine continue around the world, after the military operation started by Vladimir Putin’s Russia. In several countries, thousands of people march to say no to war and show solidarity with the Ukrainian people. In the marches, including blue and yellow flags and peace, many Ukrainian citizens residing abroad. In the picture, the demonstration in Washington in front of the White House

WATCH THE VIDEO: The demonstration for Ukraine in Milan

People on the street today also a Genevain Switzerland

Ukraine, US ready to help Zelensky to leave Kiev, he refuses: “I want ammunition”

The demonstrations to say no to war have been going on for a few days already. This is today’s procession a Romeafter last night’s torchlight procession at the Colosseum

The war is in Kiev: even a residential building hit by a missile. PHOTO

A march for peace in Ukraine also a Florence

The history of Ukraine

Event also a Cagliari. But the Italian cities that have mobilized are many

The no to war also comes from Mexico City

Demonstration to ask for peace in Ukraine also in India

Parade for Ukraine also in Australia, a Sydney

Protests against the Russian invasion also a Taipei

Demonstrations against the invasion of Ukraine also took place in Russia, with many arrests by the police (in the photo, St.Pietroburgo)