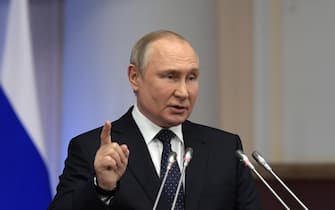 If Russia is threatened, “it will respond with means that its opponents do not yet have”. This is the warning launched in recent days by the Russian president Vladimir Putin. The Russian leader added: “We have tools that nobody has and we will use them if necessary”. But what does the head of the Kremlin mean? And what weapons does Moscow actually have at its disposal?

It is likely that Putin was referring to the Sarmat ICBM, tested a week ago. A weapon that “has no equal” in the world, “capable of evading any missile defense system”, said the Russian president. The missile represents the flagship of Moscow’s defense programs for the development of military systems innovative, ranging from rockets to submarines (In the photo, the missile tests)

THE SPECIAL ON THE WAR IN UKRAINE

The Sarmat ballistic missile with atomic capability it can hit the United States and, according to the Roscosmos space agency, will be able to guarantee Russian security for the next 30-40 years. A carrier capable of carrying 15 nuclear warheads and dropping them along a flight path of up to 18,000 kilometers

Then there are the hypersonic missiles like the Kinzhal, that Russia was the first country to use Ukraine in combat to destroy, among other things, enemy weapons depots. They are vectors that reach at least five times the speed of sound (6,190 km per hour), potentially reaching any target in the world in one hour (In the photo, Kinzhal hypersonic missile)

Russia, from missiles to submarines: the most sophisticated weapons in Putin’s arsenal

Another category is that of cruise missiles nuclear-powered, such as the Burevestnik. According to experts it is the Russian weapon about which there is less information (In the photo, the preparation of the Burevestnik, in 2018)

Then there are submarines. Like the Poseidon, an underwater robot capable of carrying out missions autonomously. Nuclear-powered, it can go under water up to 1 km deep, making it potentially unassailable by traditional submarines (archive photo)

According to Putin, this type of submarine “can carry conventional weapons or nuclear, which make it capable of hitting various targets, including aircraft, coastal fortifications and infrastructure “(F.archive photo)