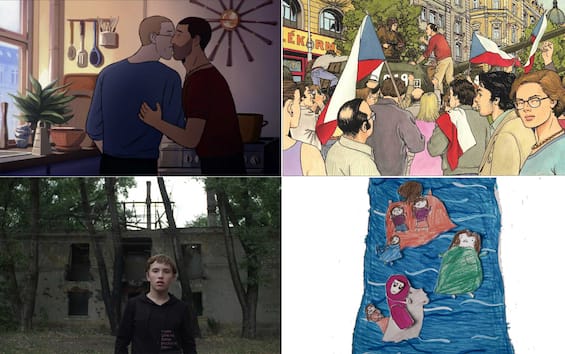 “Diasporas Encounters and Metamorphoses” This is the title chosen for the SalinaDocFest, the narrative documentary festival born from an initiative of Giovanna Taviani and now in its 16th edition.
The final selection, which will arrive from 30 June to 3 July at the Casa del Cinema in Rome, includes six films in competition, four national premieres and a world premiere; Ukraine, Belgium, France, Iran, Central African Republic, Democratic Republic of Congo, Saudi Arabia, Switzerland, Germany and Italy are the countries involved. Among the guests, Salvatore Cusimano, Giorgio and Mario Palumbo, Vittorio Giardino, Paolo Mondani, David Polonsky, Stefano Savona, Cris Toala Olivares. Beppe Fiorello special guest of the final evening, Sunday 3 July. To enrich the Roman calendar, two large thematic windows: “The metamorphosis of the language of reality. The animated documentary ”, divided into screenings and masterclasses, and“ Isole Vulcani Energia ”, a focus dedicated to the discovery and protection of environmental riches, produced in collaboration with Green Salina Energy Days.

The awards of the Aeolian section of the festival have also been announced: Ravesi Prize From Text to the Screen to Nadia Terranova, Pistì Prize to Ricky Tognazzi for his documentary The mad desire to live, the Irritec Prize to Giuseppe Tornatore, the SIAE Prize to Leonardo Di Costanzo. “Protecting the cinematographic heritage of our country is one of the objectives that SIAE pursues by promoting events such as Salina Doc Fest. Being among the supporters of the Narrative Documentary Festival is a source of pride for our Company which has always been close to the authors of Italian cinema, also supporting them in the battles for their rights – declared SIAE Director General Gaetano Blandini – I am particularly pleased that this year our award goes to Leonardo Di Costanzo, a screenwriter and director who, with his essential style, manages to pass from documentary to fictional cinema, always with his gaze anchored to reality “.

This year’s edition aims to be an invitation to reflect on plurality and the multiple – in history, in the present and in art – starting from the many hybridizations that the language of the documentary has gone through in recent years. In the program of the festival, the story of reality will be declined in all its forms, to cross together with the public a universe in which, alongside the document and history, the unexpected dimensions of opera and dreams find their place. The Grand Prix Media Fenix ​​will be awarded to the Best Documentary of the SDF 2022 International Competition by a jury composed of Laura Delli Colli (President), Igiaba Scego and Gioia Avvantaggiato. The Dams Students Award / Roma Tre University presented by Professor Ivelise Perniola, President and coordinator of the student jury.

The films in competition – selected by Antonio Pezzuto, Anna maria Pasetti and Paola Cassano – are (in order of screening): TERYKONY by Taras Tomenko (Ukraine 2022, 80 ‘- Italian preview in collaboration with Biografilm Festival), an appeal for peace and to the hope, in the story of the life, between games and rubble, of two children from Donbass, at war since 2014; MA VIE EN PAPIER by Vida Dena (Belgium, France, Iran 2022, 80 ‘- Italian preview), in which a Syrian family refugee in Brussels relives the trauma of flight and imagines its future, in an intimate portrait made of drawings, songs and words; NOUS, ETUDIANTS! by Rafiki Fariala (Central African Republic, France, Saudi Arabia, Democratic Republic of Congo 2022, 82 ‘- presented at Berlinale 2022), where the director, together with three friends like him, university students from Bangui, shows the difficulties and dreams of a youth however ready to build the future of her country; BETTINA by Lutz Pehnert (Germany 2022, 107 ‘- National preview – presented at Berlinale 2022), the artistic and political history of Bettina Wegner, German singer-songwriter born in West Berlin and raised in East Berlin (among her most famous songs “Kinder – Children “, also sung by Joan Baez), told to the director by the now 70-year-old protagonist; DIDA by Nikola Ilić and Corina Schwingruber Ilić (Switzerland 2021, 78 ‘- National preview), another subjective between two worlds: Switzerland, where Nikola has lived for years, and Serbia where he was born and where his mother Dida lives, suffering from learning difficulties and dependent on her aging grandmother; PIAZZA by Karen Di Porto (Italy, 2022, 60 ‘- World premiere), a personal look at history of the popular heart of the Roman Jewish quarter and of the people who live there, in search of their identity roots and those of a whole people, in a backward journey through the diaspora, from today’s ‘square’ to Israel.