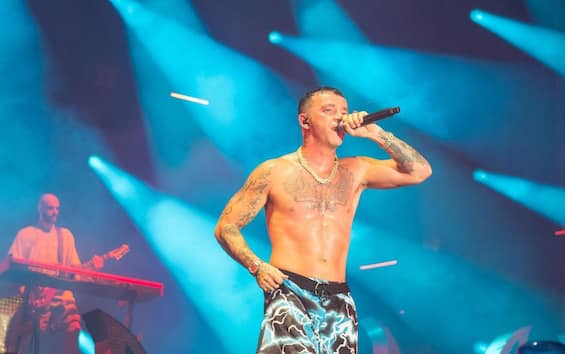 Psalm. San Siro, This is is the story of a live, that of 6 July 2022, which gathered 50 thousand people in the Milanese stadium enraptured by the rhythm of the Sardinian rapper, a special preview of Flop Tour who will see Psalm on the stages of the most important arenas from 17 November; a journey imbued with intense work, passion, teamwork and unshakable trust, which winds through rehearsals in Sardinia, the first date in Bibione and the concert at San Siro in Milan, in the embrace with the audience that has been waiting for him for two years. The documentary aired Friday 18 November at 21.15 exclusively on Sky Artstreaming only on NOW and also available on demand, follows Salmo and his band behind the scenes of the concert, allowing the public to access usually reserved areas: “Preparation is the big event; that’s where all the true passion. San Siro is what happened before,” says the Sardinian rapper”.

To accompany Psalm, in this story directed by Giorgio Testi, the band that the artist has composed over the course of several years of his career: Daniele Mungai, aka Frenetik (guitar and keyboards); Riccardo Puddu, aka Verano (keyboards); Jacopo Volpe (drums); Davide Pavanello, aka Dade (bass); Marco Azara (guitar) and DJ Damianito: “The perfect circle happens when there is alchemy between people. I think I have found unique musicians: everyone has his own style, everyone is a character and put together we become one thing When we’re on stage it’s not Psalm and the band, we’re a band”, declares the rapper.

Between rehearsals and live Psalm performs some of his most famous songs such as 90MIN, Mic Taser, FLOP, introduced by a monologue on failure edited by Josafat Vagni, 1984 and others, as well as performances with Blanco, Ensi, Lazza, Nitro and Noyz Narcos: “For me, live is a need and sometimes I go to play without saying anything to anyone, because I really need it physically -says the rapper- that’s why the first thing I thought when I got off the stage was: I want to do it again. I don’t it is enough for me”.

PSALM. SAN SIRO, THIS IS
Friday 18 November at 21.15 exclusively on Sky Arte, streaming only on NOW and available on demand.
A Sky Original, Lebonski and Vivo Concerti production, made by Pulse Films Italia