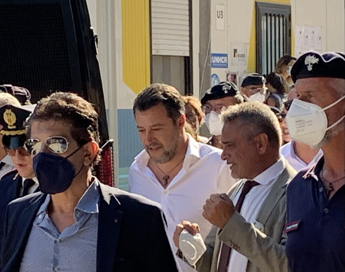 (from the correspondent Elvira Terranova) – The servants of Villa Due Palme worked overtime for Matteo Salvini’s arrival in Lampedusa. The leader of the League will spend his two days in Lampedusa as a guest in the mega villa purchased ten years ago by former Prime Minister Silvio Berlusconi after his visit to the island. The first stop on the Lampedusa trip of the former Minister of the Interior Salvini is at the Municipality, where he meets the mayor Filippo Mannino and the deputy mayor, the Northern League player Attilio Lucia. Here the three talk about the island’s problems, from the lack of a hospital, to sewers, to infrastructure problems. Then, Salvini, shortly after 16.30 arrives at the Contrada Imbriacola hotspot, surrounded by numerous policemen and carabinieri, where 550 migrants, including women and children, are crammed. The other 500, present until yesterday, have been transferred to the mainland in the past few hours. At the exit Salvini stops with the journalists, who are forbidden from entering the reception center, and makes it known that the next Minister of the Interior “will be a woman or a man from the League, because we have written the security decrees. us “, he explains. And to those who ask him if he aspires to return, Salvini spreads his arms and says:” I will go where the Italians send me … “.


In the meantime, two small boats are intercepted off the coast of Lampedusa and accompanied first to the Favaloro pier, then to the Contrada Imbriacola hotspot. “Minister Lamorgese wants to hide the problem”, says Salvini who reiterates: “When I was Minister of the Interior there were far fewer deaths and far fewer landings …”. To those who ask him who will win the next elections, he says: “I think the center-right will have a good majority in both the House and the Senate and that in the center-right the League will be the one that will have the greatest success.” In the case, “I have the honor and the burden of indicating the premier.” And replying to Tajani and Meloni, he explains: “I asked that for transparency, the names of the most important ministers, Economy, Foreign Affairs, be indicated before the elections. , Justice “.

‘Musumeci resignation? We are very ready, I will often come to Sicily ‘

Then, when Nello Musumeci’s resignation as Governor is not yet official, because it will only arrive in the evening, Salvini says: “I will soon choose the name of the candidate for President in Sicily. Just this morning I had a meeting in Catania. The League lists are ready. Probably, and this is the beautiful thing, it will not be just League lists, but different forces and energies, different cultures and policies will run under our flags “. After a few hours, on the sidelines of the meeting with the fishermen, when he learns of Musumeci’s resignation, he says: “We are ready, indeed very ready. From now until 25 September I will often come to Sicily, the lists are ready”.

Then, he takes it out on “some NGOs” who make “money on the skin of the desperate”, but he does not want to say which ones: “I already have several processes, I would not like to add others. On the contrary, see you on September 16 in Palermo … “, referring to the trial in which he is charged with kidnapping in the Open Arms affair. And speaking of the conditions of the hotspot he says they are “unworthy of a civilized country”, and, he clarifies, “it is not a management problem, but of a Ministry of the Interior that does not do its job”.

But how to deal with the problem of landings? “We will introduce security decrees,” she says. Reiterating that the agreements with Libya and Tunisia “are necessary”. And then he launches another idea: “the identification centers in North Africa. Only those who have documents in order must enter”.

Last stop in the former council chamber of Lampedusa where he meets the fishermen. And then at a dinner with the MEP Annalisa Tardino, the deputy secretary of the League in Sicily Anastasio Carrà, the deputy mayor Attilio Lucia and some loyalists. Then, as Adnkronos anticipated, to sleep in the luxurious villa owned by Silvio Berlusconi with a view of Cala Francese, Villa due Palme. Silvio Berlusconi bought it just over ten years ago, in the spring of 2011, after visiting Lampedusa. “I – said the leader of Forza Italia, as soon as I got off the plane – I have to become Lampedusano. I connected to the internet and found a beautiful house in Cala Francese, it’s called Due Palme and I bought it”.

Two million euros invested, with the aim of relaunching tourism on the island. Meanwhile, the white building, surrounded by giant palm trees overlooking the sea, on two floors and with eight beds, becomes the 29th home of the Knight. The renovations lasted until 2015, then in June 2019 for the first time the Knight sets foot in his home. The following year, in 2020, in those parts we see Luigino Berlusconi, the youngest son of the former Prime Minister. For him a short vacation with his friends, after landing with his private jet at Lampedusa airport. And today to use it, for his brief visit to Lampedusa, is Matteo Salvini. Who will leave the island tomorrow, after a visit to the municipality.