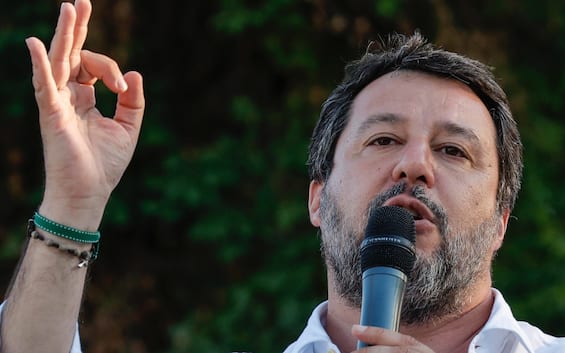 Interviewed by Corriere della Sera, the leader of the League observes that “this government was not born to open the doors to the 27,000 illegal immigrants who have landed so far”

“We observe with concern the continuous provocations of Pd and 5Stelle. Instead of working in Parliament on increasing salaries and pensions, they legalize drugs and give easy citizenships”. Interviewed by Corriere della Sera, the leader of the League, Matteo Salvini, observes that “this government was not born to open the doors to the 27,000 illegal immigrants who have landed so far”. And “legalizing drugs would be madness: it does not reduce crime, on the contrary it strengthens criminal organizations that will be able to act in the light of the sun, it has serious effects on the health of young people by favoring the entry of children into the world of drugs”. As for the Ius scholae he reflects: “The Istat data show a very high deviance among young immigrants, considerably higher than the Italian peers. The percentages of deviance and the differences compared to Italians decrease considerably after the age of 45”. According to Salvini, “a real path of integration is necessary. Citizenship must be deserved not given as a gift. Otherwise, there is a risk of increasing social disintegration”. According to the Lega, “Italians want answers on work, energy costs, inflation that erodes pensions and wages, a reduction in the tax burden, freeing from bureaucratic ties. Blocking Parliament to vote Ius scholae and free drugs is against the interests of the country . We have been very responsible up to now: from the war to the pandemic to the tax reform, while asserting our positions. The dialectic is the salt of democracy. However, we cannot accept a forcing that risks damaging Italy and the Italians “.