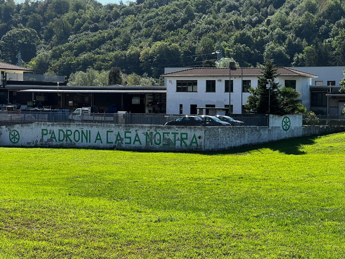 the maxi-stage was assembled, 200 coaches and 100 journalists expected

‘I believe in Italy and in the League’. All peeling, on the wall that runs along the Pontida meadow, the old writing ‘Padroni a casa nostra’ still resists. But Pontida 2022 focuses on the slogan of the ‘credo’ that Salvini has launched for this electoral campaign. In the cradle of the Northern League, where the myth of the Carroccio who rebelled against thieving Rome was born, today we think about the vote, in the elections of 25 September, which will arrive on the Sunday following that of Pontida. Salvini calls on him, wants to give a message of compactness and strength, aims to go back to the polls. The new challenge of the Captain, after the administrative which saw him defeated even in the north, until yesterday the unconquered bastion of the Lega, and now fought over by the ‘cousins’ of the Brothers of Italy, led by Giorgia Meloni.


Meanwhile, Via Bellerio provides the first official numbers, relating to the expected participation. Over 200 buses will arrive in the Bergamo area, then there will be space for campers and caravans, while the hard and pure Northern League will arrive with their cars. Meanwhile, the gazebos, which will be 38, are being assembled to represent the regions of the League with a national vocation, and some associations. The stage will be in a maxi version, twelve meters high, 30 wide, with two mega screens to show the leaders even from those who are far away. As always, the schedule of interventions remains top secret. While over 100 requests for accreditation have been registered for journalists, including from abroad. Certainly the Saturday of the young people, the eve of the party, the day in which the boys of the League gather in the square for this year will jump: “We will not go – explained to AdnKronos Luca Toccalini – coordinator of the young leagues – we are committed to territories for the electoral campaign “.

Mayor Pontida, ‘we are waiting for a lot of people, Salvini will launch slogans by vote’

Since 2019 Pierguido Vanalli is the mayor of the town of Pontida, the municipality with about 4500 inhabitants that hosts the event. “We are ready – he says to AdnKronos – the weather seems to be perfect, we are in the electoral campaign, it is the last 5 days of the electoral campaign and there will be a sprint”. Salvini expects the appeal to vote: “I think those will be the themes he will propose to us, in view of the vote.” The first citizen, class of ’64, long-time Northern League player (“I have the card since ’99”), hopes that there will be at least the turnout of 2019, the last edition of the party, before the pandemic stops. “We have excellent data, from the prefecture we know that many people are expected”. Vanalli ‘believes’ in Salvini: “Even as Minister of the Interior, despite the Five Stars he did something”. “With Draghi, much appreciated here too, we tried, then someone thought that a lot of garbage was more important than the government and sent him home”, he says again with reference to Conte’s M5S. And now Salvini has adapted, which is why we are voting … “. Will Bossi also be there?”

From the Municipality to the restaurant. Chicco Signorini is one of the owners of the local pizzeria ‘Anch’io’, a few hundred meters from the lawn that will host Salvini and him. “We get ready too – he says at AdnKronos – for now I have a table of ten booked, they are my friends, usually that’s the way it is, but then on Sunday everyone comes to eat”. First of all, Signorini is counting on the security forces: “I think there will be about 150 agents and carabinieri who come here with a set menu this year,” he says. “Digos, dog departments and policemen are our regular customers”. Signorini is 61 years old, and tells of his Pontida experience: “It all happens in one day, then we go back to our normalcy, but now many of us here ask ourselves what we will vote for, I – he admits – this year I will not vote Lega, as I have made in the last elections, certainly I will not go to the left, but I will not vote for Berlusconi either … “. The entrepreneur leaves no room for imagination, even in Pontida there will be votes for Giorgia Meloni.

bartender in piazza Giuramento, ‘there is a crisis and nobody helps us, I haven’t voted for 30 years’

“Salvini – he explains – is wavering, he has put aside the demands of the productive north, he has promised without keeping, and on some issues I think it was excessive, such as on migrants”. “He also made a government with Conte who for me remains a runaway from home”, is the reproach. Then there is nostalgia, but it is not for Bossi: “I grew up with Berlinguer and Almirante, who were true politicians”. Now we think about work: “The meeting is the only day in which we serve customers with plastic plates and glasses, but so be it, because finally something is collected and these days it is a breath of fresh air … “.

Meanwhile, on the telephone of the village bar, the ‘bar 8’ in piazza del Giuramento (the one dating back to 7 April 1167, which gave birth to the Lombard League against Barbarossa), replies Renato, one of the two titular brothers. “The Lega party? The more people the better, so we earn, because the crisis here in the Bergamo area is truly dramatic”. But Renato also has no illusions: “I have not voted for 30 years, I am neither for nor against Salvini or the other politicians – he tells AdnKronos -. The truth is that nobody helps us, we always have to make do. Those only tell a lot of balls … “.