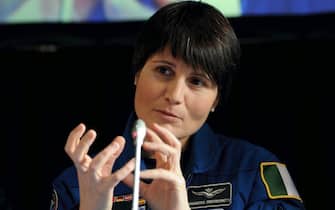 From Italy to Space. Samantha Cristoforetti she was the first Italian female astronaut to be part of the crews of the European Space Agency. Between 2014 and 2015, with the ISS Futura Expedition 42/43 mission she remained in space for 199 days, a female record up to that point.

WATCH THE VIDEO: Samantha Cristoforetti returns to space with direct on TikTok

Born in Milan in 1977, grew up in Trentino. You studied between Italy, the USA and Germany, where you graduated in aerospace engineering in Munich

From Hack to Gianotti, the 10 most famous Italian scientists. PHOTO

In 2001 he began his career as a pilot of the aeronautical academy of Pozzuoli, going as far as the role of captain. She then specialized in the United States of America with the Euro-NATO Joint Jet Pilot Training (ENJJPT) program, where she becomes a war pilot and she is assigned to the 132nd squadron of the 51st Wing of Istrana in Italy.

Samantha Cristoforetti returns to Space, will be the first TikToker astronaut

In 2009 she was selected in ESA’s astronaut training program: she was the first Italian woman and third European ever, resulting among the six best of a selection in which 8,500 men and women had taken part

Samantha Cristoforetti posts photos of her baptism of flight: “One of the most beautiful days”

Cristoforetti was selected for the Future mission, a long-term ASI mission to the International Space Station. The preparation lasted more than 2 years, from July 2012, and mainly took place in “Star City”, the Russian astronaut training center.

The training phase was also followed a lot on the web thanks to a daily diary written by Cristoforetti from 500 days before departure, initially scheduled for December 2014

The astronaut traveled between training centers between Russia, Europe and the USA perfect his preparation

Samantha Cristoforetti returns to space, the announcement of Esa

One click a just over a month from leaving for space

AstroSamantha, the diary of his adventure

ISS Expedition 42/43 Futura mission started on 23 November 2014: on board a Soyuz vehicle, Cristoforetti has reached the International Space Station

Cristoforetti was there first Italian woman in space. During the program you have carried out experiments of various kinds

With the mission Cristoforetti obtained the European record and the female record for staying in Space in a single flight (199 days), the latter overtaken in September 2017 by the American Peggy Whitson with 288 days, and then in turn overtaken by Christina Koch, NASA astronaut

On 9 November 2019 she was awarded a honorary degree in aerospace engineering at the Turin Polytechnic. Previously, in 2017, she received one in bioengineering in Pavia

Samantha Cristoforetti has two sons, born from the union with his partner Lionel Ferra, French and also an engineer. To the eldest daughter born in 2016 you dedicated the book “Diary of an astronaut apprentice”

Since 2015 Cristoforetti is Unicef ​​ambassador. In 2018, Mattel dedicated a doll to her Barbie inspired by her

At the end of 2019 it emerged that Cristoforetti has decided to leave the Air Force. He took leave from the beginning of 2020, concluding the 19 years of compulsory stay. However, he continues to be part of ESA, the European Space Agency

On May 28, 2021 it was announced that Samantha Cristoforetti will take part as a mission specialist at the SpaceX Crew-4 flight. The launch of the Crew Dragon capsule with a Falcon-9 rocket from Kennedy Space Center in Cape Canaveral, Florida is scheduled for April 23, 2022although due to bad weather in Florida it seems possible that it will be postponed to the following day

The space mission will serve (among other things) a complete the installation of the new European robotic arm on the International Space Station (Iss). The Italian ESA astronaut arrived at Kennedy Space Center with her colleagues from the Crew-4 mission: Kjell Lindgren, as commander, Bob Hines, as pilot, and Jessica Watkins with Cristoforetti as mission specialists. Cristoforetti will remain aboard the ISS for a mission of about six months