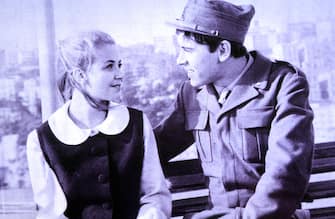 Kneeling by you is a sentimental film of 1964 directed by Ettore Maria Fizzarotti which is inspired by the homonymous song by Gianni Morandi, who is also the interpreter of the main character. During the film Morandi sings several of his hit songs. It was during the shooting of the film that the love between Morandi and Laura Efrikian (who married two years later) was born. It is the first title in a trilogy that he will continue with I am not worthy of you And If I didn’t have you anymore

Very high pressure is a 1965 film directed by Enzo Trapani. In the film Gianni Morandi interprets himself

Sanremo 2022, the schedule of the Third Evening

I am not worthy of you is a 1965 film directed by Ettore Maria Fizzarotti which is inspired by the homonymous song by Gianni Morandi, who is also the interpreter of the main character. Made between Kneeling by you And If I didn’t have you anymore, constitutes the central element of a trilogy that continues the same narrative. The film features a curious flashback to the previous film

Sanremo 2022, the funniest memes about the Festival

If I didn’t have you anymore is a 1965 film directed by Ettore Maria Fizzarotti. It is part of the so-called musicarelli films. After Kneeling by you And I am not worthy of you, concludes a trilogy that continues the same narrative

All the news on Gianni Morandi

You will see me return is a 1966 film directed by Ettore Maria Fizzarotti. In this “musicarello”, Gianni Morandi plays Gianni Aleardi, a cadet of the Academy of the Navy in Livorno; having obtained a license just before embarking on the end-of-course cruise on the Andrea Doria, he decides to return to his family in Rome with his friend Saro. During his stay, he meets in a ballroom a young Japanese princess, Liù, daughter of Prince Hiro Toyo, the Japanese ambassador to Rome, with whom he falls in love

For love … by magic … is a 1967 film directed by Duccio Tessari, with a screenplay by Franco Migliacci and produced by Franco Cristaldi for the Vides Cinematografica company. Set in a fantastic Middle Ages, the work sees Gianni Morandi in the role of Aladino, a nice and penniless boy: like his sister Algisa he has no degree of nobility, but is in love with the daughter of the Grand Duke of Forilarì, the beautiful princess Esmeralda , that the Viscount of Pallerineri would like to marry, to take possession of the Duchy

Chestnuts are good is a 1970 film directed by Pietro Germi. Gianni Morandi is Luigi Vivarelli, an unrepentant womanizer television director. During the filming of a program on youth discomfort, he meets Carla Lotito, an out-of-office architecture student and athletics practitioner, and is immediately attracted to her. But she is not like all the women Luigi usually goes to: a practicing Catholic, she believes in the true, simple values ​​of life

Chimera is a 1968 film directed by Ettore Maria Fizzarotti. The title derives from the homonymous song sung in the final scene by the protagonist Gianni Morandi. Gianni is a singer at the beginning of his career: recently married (and in great secrecy, not to disappoint the fans) with Laura, he struggles to achieve such success that allows him to meet the expenses that a married life entails. The big opportunity comes when the impresario Giuseppe “José” Da Costa, an Italian transplanted to Brazil, offers him to perform in a series of concerts in Rio de Janeiro

Slap face is a 1969 film directed by Armando Crispino. It is a sentimental comedy starring Gianni Morandi and Laura Belli

The provincial is a 1971 comedy by Luciano Salce. Gianni Morandi is Giovanni, who moves to Rome from the province to pursue the profession of journalist, but the impact is disappointing because no newspaper is interested in hiring him. The young man adapts to work as a gas station attendant and mechanic at a gas station. One day he is hit by a luxury car, from which Giulia (Maria Grazia Buccella) gets off, a beautiful and very elegant girl, who hosts him at home and with whom a love story begins in a short time.

The funny thing is a 1972 film directed by Aldo Lado and based on the novel of the same name by Giuseppe Berto. Gianni Morandi is Antonio, an elementary school teacher. One day he falls in love with Maria, a young and rich Venetian girl, but their relationship is hampered by her parents, who do not look favorably on the social background of the young man and even go so far as to offer him money as long as he gets away from it. Boy

Hosts is a 2012 film directed by Edoardo Gabbrielli. Cosimo (Valerio Mastandrea) and Elia (Elio Germano) are two tilers from Rome commissioned by the singer Fausto Mieli (Gianni Morandi) to repave the terrace of his house. A very successful singer, Fausto has chosen to retire from the stage following a serious illness of his wife Moira. Despite the great displays of affection, it is clear that there is something wrong between Fausto and Moira

Gianni Morandi in The island of PietroItalian television series set on the island of San Pietro, in the province of Southern Sardinia

Metello is a 1970 film directed by Mauro Bolognini, based on the novel of the same name by Vasco Pratolini. Presented in competition at the 23rd Cannes Film Festival, it earned Ottavia Piccolo the prize for best female interpretation. Massimo Ranieri, being Neapolitan, was dubbed with Florentine cadence by Rodolfo Baldini. Ranieri broke his right arm during filming

Letter beyond the sea, the text of the song by Massimo Ranieri in Sanremo 2022

Ottavia Piccolo and Massimo Ranieri in Boubù. 1971 film directed by director Mauro Bolognini, it is a transposition set in Italy at the end of the 19th century (1897) of the novel Bubu de Montparnasse by Charles-Louis Philippe

Massimo Ranieri and Kirk Douglas in The lighthouse at the end of the world (The Light at the Edge of the World), a 1971 film directed by Kevin Billington and based on the novel of the same name by Jules Verne

Encounter is a 1971 film directed by Piero Schivazappa. Claudia Ridolfi (Florinda Bolkan), a woman apparently satisfied by her marriage, meets by chance, during a party of mutual friends, Sandro Zanichelli (Massimo Ranieri), a little younger boy who quickly falls in love her

Charging for murder for a student is a 1972 film directed by Mauro Bolognini. On the occasion of a clash between workers and students and police, a policeman and a student are killed; a student (Massimo Ranieri) is blamed for the policeman’s death. Having discovered who is responsible for the crime, the investigating judge resigns

Unless Purchase is a 1974 film directed by Romolo Guerrieri. Massimo Ranieri plays the non-commissioned officer of the carabinieri who surrendered to the Germans on 23 September 1943 in order to save 22 civilian hostages from being shot.

The last time is a 1976 film directed by Aldo Lado. Massimo Ranieri plays the young Sandro Esposito, an unemployed bartender, who lets himself be persuaded by his peer Pericles, a former motorcyclist racer, to become a mugger. After the failure of the first attempts of theft, thanks to the involuntary information of a friend of Pericles, they manage to carry out the scam against a false monsignor specialized in exporting capital to Switzerland

The hot potato is a 1979 film directed by Steno. Massimo Ranieri plays Claudio, a gay boy, saved from an attack of neo-fascists by Bernardo Mambelli (Renato Pozzetto), a Milanese worker of a paint factory with a passion for boxing, nicknamed the Gandi

Massimo Ranieri in The carabiniere1981 film directed by Silvio Amadio

Massimo Ranieri in Civic zero (also referred to as Civic 0), documentary film by Francesco Maselli from 2007 on the themes of immigration and social exclusion

The last Pulcinella is a 2008 film directed by Maurizio Scaparro. Massimo Ranieri plays Michelangelo Fracanzani. a classic actor specializing in the dramatic role of Pulcinella; he has a son, Francesco, a stage specialist (lighting technician) but who does not intend to follow in his father’s footsteps, and a separated wife, Paola, who despite being a good dancer preferred to choose the safest craft of seamstress

The machination is a 2016 film directed by David Grieco, based on the life of director and poet Pier Paolo Pasolini. In the film, Pasolini is played by Massimo Ranieri, flanked by Libero De Rienzo, Roberto Citran and Milena Vukotic in the role of mother Susanna Colussi

Riccardo goes to hell is a 2017 film directed by Roberta Torre. Massimo Ranieri plays Riccardo Mancin, a man discharged from the judicial psychiatric hospital where he spent many years for a mysterious crime. He is determined to take revenge and seize power within his underworld family; he will have no scruples in getting rid of his brothers and those who hinder his path and he will do it by singing

All the news about Emma Marrone

All the news on the TV series A casa tutti bene

All the news on Achille Lauro

Cicciabomba is a 1982 comic film directed by Umberto Lenzi. The protagonist is Donatella Rettore in the part of Miris Bigolin, a nice but ugly girl (and quite overweight) known in the village with the nickname of “cicciabomba

Noemi plays herself in Kissed by the sunan Italian television miniseries, directed by Antonello Grimaldi

Iva Zanicchi is Gina Carucci, the mother of Cristiano (played by Claudio Santamaria) in The last new year1998 film, directed by Marco Risi

Iva Zanicchi plays Liliana, in the television series Catherine and her daughters

Francesco Sarcina, singer of Le Vibrazioni in 2011 starred in the part of Fregone in The Usual Idiots – The Movie

Ana Mena, aged 13, plays a small part in in The skin I live in (La piel que habito), 2011 film directed by Pedro Almodóvar based on the novel Tarantula (Mygale) by Thierry Jonquet