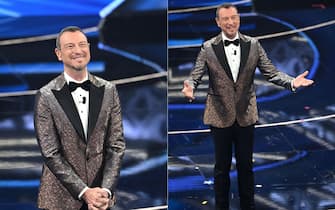 Amadeus greets the public of the penultimate evening of Sanremo 2022 with a lamé jacket with a black and copper geometric pattern. The brand is still Gai Mattiolo

Sanremo Festival, an evening of duets and covers. DIRECT

Noemi, the first to perform in the evening of the covers, focuses on elegance with a smooth dress with train and slit. The color of tonight’s Alberta Ferretti creation is a vibrant fuchsia. In evidence, heeled sandals in silver laminated leather by the Italian brand Santoni

Maria Chiara Giannetta, actress born in 1992, brings to the Ariston all her freshness and exuberance and the blue dress with short Giorgio Armani Privé skirt is a perfect choice for her debut as co-host

Who is Maria Chiara Giannetta, co-host in Sanremo 2022: 21 curiosities

For his duet with Vinicio Capossela, Giovanni Truppi opts for a red tank top, a symbolic choice in line with his piece, which highlights him behind the piano, where he sits for the first time in Sanremo

In my hour of freedom, the lyrics of the song sung by Truppi and Capossela

Yuman, busy with a legendary piece by Frank Sinatra, chooses one of the complete two pieces he has accustomed us to in recent performances. Dark and with striped fabric that of this evening

Rita Marcotulli, who is the artist paired with Yuman in the cover evening

Sangiovanni prefers total white for his Diesel look, setting aside his usual colors for once and with Fiorella Mannoia, his guest, dressed in black, creates an interesting visual contrast

Emma Marrone and Francesca Michielin shine together, finally, in front of the microphone. Emma in Gucci, rhinestones on forest green velvet. Michielin in Miu Miu: the style for her is that of the early 2000s, the golden years of Britney Spears

Their artistic synergy has made fans dream since the announcement of their participation in the Festival. Emma Marrone and Francesca Michielin confirm themselves as one of the most glamorous couples in Sanremo. In tune on and off the stage, tonight they show off a coordinated graphic make-up that is already on trend. Clinique for Michielin, Gucci Beauty for Marrone

Francesco Sarcina and the band The vibes that for this Sanremo dress Gaelle Paris, host the British group Sophie and The Giants for a rock moment all in black. In a black latex dress also for the leader Sophie Scott. All perfectly in tune with the performance on the immortal Live and Let Die

Who are Sophie and the Giants, group at Sanremo 2022 with Le Vibrazioni

Another black and white couple on the scene and one of the most anticipated: Loredana Bertè and Achille Lauro, the latter, this evening, (all) dressed in white, with a Gucci look. Platinum hair and flawless haistyle

You are beautiful, lyrics of the song sung by Achille Lauro with Bertè

An unprecedented couple formed by Matteo Romano and Malika Ayane. The two are confronted with Elton John’s magnificent Your Song. Both in Armani: Emporio Armani for the young artist and Giorgio Armani for the veteran from Sanremo, very elegant in a black velvet dress

Your song, the lyrics of the song sung by Matteo Romano and Malika Ayane

Irama invites Gianluca Grignani to the Sanremo stage and their duet is an important moment for Ariston. For the occasion, the competing singer crosses the audience in a tank top. Impossible not to notice the original look of him, always Givenchy

My story between your fingers, the lyrics of the song sung by Grignani and Irama

Sanremo 2022, because everyone says “skullcap” and “aunt Mara”

Sanremo 2022, Jovanotti and Gianni Morandi go wild with a medley of successes

Iva Zanicchi still chooses a long dress in shiny fabric and a light chiffon tunic. She tonight in black with bright silver flashes

Be My Baby’s version of The List Representative is a session with many artist friends: Cosmo, Margherita Vicario and Ginevra. But it is always Veronica and Dario who steal the show, also tonight in a Moschino total look, more and more futuristic: silver leather for her, black leather for him

Be my baby, the lyrics of the song sung by The representative of Lista

Ana Mena, hair down and ice-colored short dress Emporio Armani is accompanied tonight by Rocco Hunt in a dark suit and white shirt with Oxford lace-ups in patent Made in Italy Santoni. Their voices make the Ariston dance

Sanremo 2022, the report cards of the Festival cover evening

Massimo Ranieri thrills everyone with his interpretation of Anna will come from his friend Pino Daniele. Like the last few evenings, her outfit is Versace. Tonight with him on stage, Nek in a Giorgio Armani teal tuxedo

Anna will come, the lyrics of the song sung by Massimo Ranieri with Nek

Michele Bravi treads the stage of the Ariston again with a suit with a strong color, bright green jacket and trousers with transparent top under the jacket in tulle embroidered with luminous stones. All Roberto Cavalli by Fausto Puglisi. The jewels that complete the look are Gismondi

Televoto Sanremo 2022: how to vote for the singers in the competition