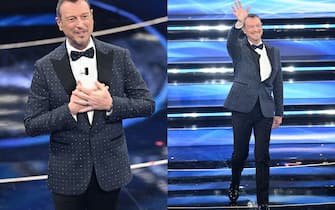 WATCH THE VIDEO Sanremo 2022, the 7 best moments of the third evening

Still a monochromatic look, black for Highsnob and white for Hu, with oversized lines and a shiny maxi blazer. Iconic

It’s you, the lyrics of Fabrizio Moro’s song in Sanremo 2022

Aka 7even does not miss the third evening appointment and her look is pastel pink, her fans will love it. He, too, is a special member of Generation Z

Perfect so, the lyrics of the song by Aka 7even in Sanremo 2022

Massimo Ranieri confirms the choice of Versace for his Sanremo performance. This time he opts for a tie that highlights the baroque motifs mixed with the chain ones, typical of the Maison

Letter beyond the sea, the text of the song by Massimo Ranieri in Sanremo 2022

Drusilla Foer, making her debut on the stage of the Ariston Theater as co-host, chooses a dress with a train in shiny fabric. The dress is a sartorial creation from Atelier Rina Milano

WATCH THE VIDEO: Sanremo: the irony of Drusilla disguised as Zorro

Dargen D’Amico is one of the most anticipated on the look front. His outfits, always original until now, are confirmed as one of the most whimsical. For his second performance, a white and blue patterned trouser suit with touches of acid green by Federico Cina. And sunglasses to top it all off

Where to dance, the lyrics of the song by Dargen D’Amico in Sanremo 2022

Tonight’s super musical guest, Cesare Cremonini, performs for the Ariston without a tie but the midnight blue tuxedo that sparkles under the stage lights. The look is Giorgio Armani

Irama also gives the Ariston public a look to remember this evening. Multi-pocket sleeveless vest and coordinated trousers, also this evening by Givenchy

Wherever you will be, the lyrics of Irama’s song in Sanremo 2022

Michele Bravi returns to perform with a Roberto Cavalli by Fausto Puglisi look that recalls his piece, Winter of flowers. Still 3D flowers on the arms but this time the vest and pants look is China red. Wet effect hairstyle and light make-up, coordinated in shades, on the eyes

Winter of flowers, the lyrics of the song by Michele Bravi in ​​Sanremo 2022

Donatella Rettore and Ditonellapiaga return to make the theater dance with their overwhelming chemistry. Another Philosophy look for the young singer who sports a transparent lace shirt. For Rector Atelier Avaro Son

Chemistry, the lyrics of the song by Ditonellapiaga and Donatella Rettore

Rkomi, who relies on Nick Cerioni for styling, opts for Etro: a white t-shirt with his now inevitable long leather gloves. The pants are also in leather with studs

Unsurpassed, the lyrics of the song by Rkomi in Sanremo 2022

Drusilla Foer, who is the host of the third evening of Sanremo 2022. PHOTOS

Mahmood and Blanco appear on stage wearing a monochromatic look for a two-tone overall effect. Black for Mahmood and White for the young companion who remains in a transparent shirt, taking off his cape before starting to sing. The brands are still Maison Valentino for Blanchito and Ann Demeulemeester for Alessandro Mahmood. Styling by Susanna Ausoni

Chills, the lyrics of the song by Mahmood and Blanco in Sanremo 2022

Alessandro Mahmood’s dress is by Belgian designer Anne Demeulemeester, one of the most popular designers of Paris Fashion Week. Known for her monochromatic creations, for the use of white, black and gray, she is loved for the conceptuality that inspires her essential garments

Mahmood and Blanco, duet from “Broglie”, at the Sanremo Festival

Gianni Morandi still chooses a Giorgio Armani tuxedo but opts for a dark version, unlike his prime time. The jacket is a model enriched with black crystals on the lapels

Open all doors, the lyrics of the song by Gianni Morandi in Sanremo 2022

Cesare Cremonini’s second look is an all-over rhinestone jacket with a rust-colored zip by Giorgio Armani. A style that is well suited to the mood of the songs of his latest intervention on stage

Cesare Cremonini guest at Sanremo 2022: the 10 most beautiful songs

Elisa returns to sing in the white Maison Valentino dress. Again a tunic but this time with thin straps that leave the tattoos on the singer’s shoulder uncovered. The beauty is still white with graphic eyeliner, already adopted for the debut evening

Or maybe it’s you, the lyrics of Elisa’s song in Sanremo 2022

Tananai, much appreciated in his Dior look from the debut evening, is back with another remarkable outfit by Nick Cerioni: mud-effect bolero-style short jacket with tank top and red Texan boots by Sonora Boots

Casual sex, the lyrics of Tananai’s song in Sanremo 2022

The representative of the list chooses pink and black for the second electrifying Sanremo exhibition. The dresses, as anticipated by Veronica and Dario, are all Moschino, custom made creations or from the brand’s vast archive

Hello Hello, the lyrics of the song of The representative of the list in Sanremo 2022

Sanremo 2022, the report cards of the third evening of the Festival

Achille Lauro returns to the barefoot stage for his second time live with Domenica. This time the pants are in shiny satin and Nick Cerioni’s styling includes a shiny black jacket, python effect, all Gucci. And his performance is explosive

Sanremo 2022, Achille Lauro: “I’d like to lead the Festival”

Iva Zanicchi chooses a shade of deep blue for her outfit tonight. Long dress embroidered and shiny with a light and transparent tunic on top. She completes the look, a multi-stranded dark stone necklace

I want to love you, the lyrics of the song by Iva Zanicchi in Sanremo 2022

Ana Mena still in Emporio Armani, the brand of the look of her debut evening in Sanremo. Short skirt and top with black sandals

Two hundred thousand hours, the lyrics of the song by Ana Mena in Sanremo 2022

Sangiovanni changes shades of pink but not the mood of his look which is always sporty, as also suggested by combat boots with rubber soles. The singer chose Diesel by Gleen Martens again this time

Farfalle, the lyrics of the Sangiovanni song in Sanremo 2022

Matteo Romano wears a blue Emporio Armani suit, a jacket with a front zip and boots on display, over his trousers

Viral, the lyrics of the song by Matteo Romano in Sanremo 2022

Anna Valle, guest of the evening, shows off a wonderful red dress with wide skirt and cockade designed by Antonio Riva. Matching lipstick and loose hair with soft waves

Emma Marrone chooses a disheveled hairstyle for her second performance on the Ariston stage but the look is always Gucci by Alessandro Michele. Ruffled blouse and high-waisted burgundy velvet skirt with deep slit (also tonight)

That’s the way it is every time, the lyrics of Emma Marrone’s song in Sanremo 2022

She ironizes Drusilla Foer and justifies her super elegant pajama-style look with the late hour. And she comes on stage with a coffee for Amadeus

Sanremo 2022, because everyone says “skullcap” and “aunt Mara”

Yuman is distinguished by his style, different for each evening but always recognizable. Also this time he takes the stage with a two-piece suit with wide and square lines. Modern and linear

Now and here, the lyrics of Yuman’s song in Sanremo 2022

Giovanni Truppi is among the last singers of the third evening but by now the public recognizes him immediately: his look, trousers and wide-shoulder tank top, makes the singer-songwriter unmistakable

Your father, my mother, Lucia, the lyrics of the song by Giovanni Truppi

Noemi still chooses Alberta Ferretti and a dark dress this time. The inspiration of the Roman singer, whose style is curated by Susanna Ausoni, is the Anna Oxa dress worn on the occasion of her historic participation in the 1986 Festival

I love you I don’t know, the lyrics of Noemi’s song in Sanremo 2022

The vibrations shake the Ariston with their performance almost at the end of the evening. The band’s look is still black with flashes of light on the tone-on-tone Gaelle Paris jackets

The Vibrations in Sanremo, rock dies but is always reborn

A loose dress and a formal suit with double-breasted jacket are the final two looks of Drusilla Foer who was center stage for a personal moment, an illuminating monologue where she discussed the word “diversity”. Elegant, casual, perfectly at ease in the role of co-host, Foer was flawless

Sanremo 2022, Roberto Saviano remembers the massacres of Capaci and Via D’Amelio