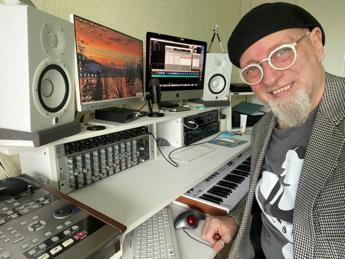 Mahmood & Blanco unattainable, Elisa convincing, The Representative of the List the best to occupy the stage. Here are the report cards the performance of the 25 singers competing in the fifth and last night of the festival of Sanremo 2022, edited ‘hot’ exclusively for AdnKronos by the former keyboardist of Matia Bazar, Mauro Sabbione. The report cards are gradually compiled during the live broadcast of Rai1 after the performances of the individual artists.

One of the most interesting voices of the festival. Barely twenty. Matteo went viral on Tik Tok with his first song ‘Concedimi’ with over 3 million downloads. Who knows if this is why the song is called ‘Viral’. Perfectly arranged by the maestro Valeriano Chiaravalle. Matteo, who doesn’t use nicknames, is definitely safe tonight. And quiet. Grade 7

Enrico Melozzi director is always present in the proposals that require groove. Tonight I’m going to talk a little more about these musician-conductors. I really like this Mediterranean-style song, and it has an absolutely catchy melody. I hope Ferreri continues on this style. Rating 6

Rkomi, questioned by Amadeus (it seems that our Ama tonight is particularly attentive to the politically correct in the presentations). Rkomi was introduced to music by his childhood friend Tedua, a Genoese rapper, and has a life full of anecdotes and works. He feels in his music production of excellent quality: already four albums to his credit and his views are over a million downloads. Bravo and kind. Rating 6

Vito Mercurio, Celso Valli, and maestro Danilo Minotti: a formidable trio for a popular song, which will be danced in the next few years in Italian dance halls and played by popular orchestras. Song that has the best guitar solo of the festival. His, probably the last Sanremo, will be a success. I noticed that Ligonchio’s eagle, like Orietta Berti, doesn’t use ear-monitors: old school stainless! Rating 6

The maestro Carmelo Patti, very young for a dance arrangement of great quality, directs. Also for Aka the placement in the middle of the standings will be positive, which will have the power to strengthen his skill and writing skills, as I have already said, aimed at the foreign market. Grade 5

6 – Massimo Ranieri -‘Letter beyond the sea ‘

And also for dear Massimo it will probably be the last festival in competition and he too collects the justifications of Amadeus for the bizarre cover evening last night. Ranieri deserves respect for his elegance and for the history that takes us to the Ariston stage and that he will continue to bring to Italian theaters. It would also be great as a conductor! Adriano Pennino’s arrangement is spectacular and beautiful: great musician for a great voice. Vote 8

Mahmood is also present in Noemi’s narrative who finally sang the song very well tonight, directed by the talented Andrea Rosini. An excellent festival for her too with a respectable palmares, seven albums and dozens of tours: by now she is a veteran who does not have to prove anything to anyone. However, I notice that many competitors have tired voices. She too. Rated 6 and a half

Carlo junior Bielli conducts this soft arrangement by Fabrizio, who will make his cinema debut at the end of the festival. This song has a very beautiful poetic, certainly a love song written and set to music by him, with the only defect of the title: it is dangerous to call a song ‘Sei tu’, because there are thousands of them in music! Thanks Fabrizio and good film debut with ‘Ghiaccio’. Grade 7

The most dance song of the festival, directed by maestro Enzo Campagnoli. Dargen made extensive use of dark glasses at the festival (today Amadeus also wore them with him), to have more charisma and symptomatic mystery. Come on Dargen, your song, which has already reached almost one million downloads, will be the only summer hit, you’ll see. Low grade because you wore a dress that was too normal tonight. With love. Rating 6

Elisa is flying in downloads, almost 2 million on the video of the song. Will Medini, the disheveled young maestro, has the thankless task of making the orchestra play in this rarefied and beautiful piece also composed by Elisa. She, who for last night’s splendid cover collected the great endorsement of Giorgio Moroder (three times Oscar and king of world DiscoDance) without needing it, today flies directly to the podium. We will see in which position. Vote 9

Giulio Nenna, who seems to be the lead singer of Symply Red, accompanies Irama: the most fascinating face of the festival that many generations of fans like across the board. Simone Rutigliano, tonight’s stylist, chained him, But he’s fine. His is definitely a beautiful lyric tenor vocal coloring, and the piece is memorized immediately. I foresee an excellent placement. Grade 7

Roberto Campagnoli, musician and conductor of great class and experience, directs Michele in this splendid song. Michele, dressed by the stylist Fausto Puglisi of the Roberto Cavalli Maison, fits perfectly into the elf part of Italian music: sensitivity, narrative, planning, emotion. Sixteen singles, Ep, albums and collaborations: a complete universe and certainly to be discovered on his next tour. Vote 8

Carmelo Patti, the nice conductor of Dario and Veronica, equipped with pink glasses: who knows if it depends on the FantaSanremo that is raging. Tonight AMLA are a blaze of pink and their tune is sparkling and trendy. Nice Sanremo for them. I quote them because they deserve it: their performance on stage is spectacular. It is the best performance in Sanremo and the public likes it! Vote 8

The director Francesca Michielin is splendid and last night she sang a beautiful cover with Emma. Emma dressed as Gucci (as Lady Gaga) is enchanting. The song has already passed 1.3 million views and is doing great. Sincere to the last. Excellent execution. Flattering placement. Grade 7 and a half

Again Carmelo Patti, a guarantee for the beautiful artistic production of Mahmood and Blanco, And here too I would like to emphasize that no one in this magnificent song is using auto-tune, a voice that circulates on social media. Mahmood and Blanco are simply precise and have rehearsed this wonderful song for a long time. Michelangelo the pianist, also co-author of the piece, is their guardian angel. If they don’t win it’s because someone has decided the opposite and I would be very sorry. Vote 10 and a half

Again the energetic maestro Enrico Melozzi and again the atmosphere of Michele Matera and Federica Ferracuti who heartily thank Amadeus for bringing them to the stage (but does FantaSanremo also have something to do with it?). I would tell them to thank themselves and their beautiful narrative. You are good and your duo is among those who grew up the most during the festival. Take care of yourself. And the public goes to see them live. Grade 7

This festival went well in Sangio too. Great performance again tonight. Catchy song also composed by him, sure hit in streaming and already 1.5 million views. Center ranking in rapid rise, the share in the top six. Grade 7 and a half

Excellent performance of the national Giannone: you can see that he still has the adrenaline of the cover evening on him. And that the Jovanotti booster vaccinated him for the caudine forks of the votes. Will it be glory? Posterity will judge. I think it will be the last festival in competition for him too. Rated 6 and a half

Flavio Gurian directs these wild ‘girls’ who came to Sanremo to have fun and entertain. It is strange to see Donatella with the punk crest that made her an indelible icon in the Italian imagination in the eighties with splendid songs. Beautiful energy in their performance and quoted piece. Grade 7

And good Yuman, perfectly supported by Valeriano Chiaravalle, one of the orchestra masters with more experience in Sanremo, apart from the national Vessicchio. Beautiful song that recalls the atmosphere of Sergio Cammariere and an excellent performance: there is not only rap, pop and rock. Hi Yuman. Grade 7

I would organize a nice provocation on the day after the Sanremo of the record: Lauro at ‘Che tempo fa’ tomorrow with His Holiness Pope Francis for a discussion on baptism. Provocations aside, Gregorio Calculli, Lauro’s very young teacher, as bizarre as he is, must remember that he directed the magnificent Harlem Gospel Sister (someone invite them to some Italian festival, please). Two chords but played wisely. Grade 7