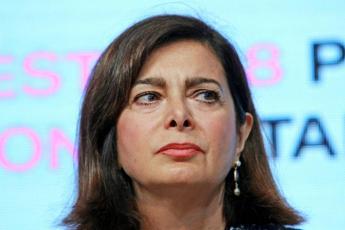 The decision of Clare Ferragni to donate her fee as co-host of the opening and final evening of the Festival of San Remo 2023 to the national anti-violence network DIRe., women in the network against violence, and to publicize its 28.3 million followers makes it one ”testimonial that can make a difference”. She is convinced theformer Speaker of the House Laura Boldrini, who has always been attentive to women’s issues. ”With this gesture – underlines the Boldrini at Adnkronos – Ferragni becomes an active part of a very just battle waged by many women in support of other women who, however, in order to emerge and to get positive messages across, need someone who has a media weight. People who have great visibility like Ferragni – he continues – can certainly make a difference because with their millions of followers they represent a point of reference for new generations. The positive message becomes even stronger when you choose to donate resources to serious and qualified structures and associations that make good use of them, as in this case. On the topic of violence against women there is still a lot to do on a cultural level – explains the former president of the Chamber – we can certainly make better laws but today there are already many laws. Unfortunately, however, every three days a woman is killed at the hands of those who should love her”.

”Despite the laws – continues Boldrini – there are still abuse, harassment and women continue to be abused and discredited. The cultural factor also depends on the fact that this theme spreads and reaches the highest possible number of people. We have thousands of operators, professionals, lawyers, women from the forces of order, from anti-violence centers and from refuge houses who deal with this issue – he underlines – but unfortunately this never emerges. It is therefore very important that well-known figures such as Ferragni are created active part in this battle”, he reiterates. ”There is a need, in order to be able to make people aware of such an important issue – continues Boldrini – that there is someone to pull the lead. Ferragni thanks to her millions of followers can be very useful because she can get thousands of young people to reach positive messages how to condemn all forms of violence against women, not condone men who do it and help victims get out of it tunnel of violence and rebuild their lives with the help of anti-violence centres”, he concludes.