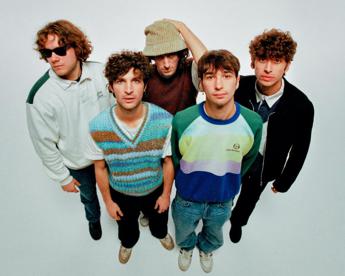 ‘This is a song’sea ​​and mountains‘ born during the pandemic. We wrote it partly in a house in the mountains and partly by the sea, during the isolation of the pandemic. It talks about a relationship but the real theme is fragility, insecurity. About the present, the future and love. It is not a hymn to love but a hymn to life”. I Colla Ziothe Milanese collective formed by Tommaso Bernasconi, Tommaso Manzoni, Andrea Malatesta, Andrea Arminio and Francesco Lamperti, thus presents ‘I do not feel like‘, the song with which they will debut at Sanremo 2023, after passing the selection of Sanremo Giovani: “Amadeus immediately wanted to hear the song that we would eventually bring to the festival, in addition to that of Sanremo Giovani, and evidently he liked it” , they point out.

The band (whose name comes from the exhortation, in Milanese slang, with which a collection is started), in which all the members are around 25 years old, was born among the school desks: “We started singing at chapel on the streets of Milan. Then we moved on to rap and now we have our own style. The song we bring to Sanremo musically represents us, it’s a slightly funk uptempo”, say Colla Zio who will also release after the festival their first album, ‘Rockabilly Carter’. “Many of the songs that make it up are children of the trauma of the pandemic experienced at the age of 20, with all our insecurities. And Rockabilly Carter is the character (fictional, ed.) who runs through several of the stories on the album. A problematic character, who he struggles to communicate and believes he is not understood. A character who falls but finds the strength to get back up”, they say, explaining that they also thought of making it into a comic.

Their very nature as a collective, the language and in part the sound have led someone to compare them to Lo Stato Sociale but they don’t agree: “Don’t compare us to anyone. We focus on originality”, they say. And they are preparing very seriously for the festival: “We are excited. Tired but happy. We are working hard to get ready for this festival. We fear grandmothers, the opinions of relatives. Even if all together, the five of us could also go to the moon without a helmet.” At the festival, they say, “we will go like sponges, with maximum curiosity, to bring home the maximum experience of this world that we want to become our work. We are very excited to meet the great protagonists of the festival and behind the scenes”. They are intrigued by Colapesce and Dimartino but also Giorgia, the Black Eyed Peas, Lazza, Tananai and the Cousins ​​of Campagna. “We were already following Sanremo before, because the event remains most important musical in Italy, but the direction of Amadeus it definitely made it closer to the tastes of our generation,” they say.

Enjoy since FantaSanremo, where they are very popular in the composition of the teams, they warn: “We will invent something but we won’t be jesters. Let’s go to the festival to make our music known”. Because, more than anything, at the festival they hope to “find an audience that appreciates us and comes to our concerts”. After the release of the album ‘Rockabilly Carter’ on February 17, the club tour will start on March 22. First stop Rome. “We can’t wait to play the album live.”