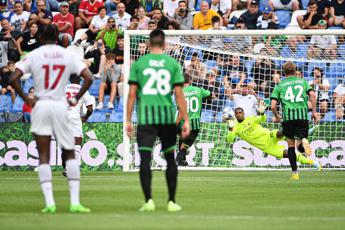 The Italian champions draw on the field of the Emilians

Sassuolo stops Milan at the Mapei Stadium in Reggio Emilia at 0-0 in the match valid for the fourth matchday of Serie A. The Rossoneri, with the second draw away, thus reach 8 points at the top of the standings but waiting for the other big players take the field, while Sassuolo rises to 5 points. The Rossoneri were looking for victory to consolidate a shared lead for other teams, but were forced to brake, with Sassuolo also missing a penalty with Berardi, right where they had won their 19th Scudetto last season. The Rossoneri had won all of their last six away games at Sassuolo in Serie A.


The Milan coach Pioli starts with a strong turnover, space for Florenzi and Kjaer in defense, Pobega in midfield, Saelemaekers and Brahim Diaz on the trocar. While Dionisi deploys the trident Berardi, Pinamonti and Kyriakopoulos. Milan starts well and at 8 ‘Leao serves Pobega, a low cross from a good position deflected with the ball reaching the Portuguese outside who kicks high. Shortly after the Lusitanian tries again, resists a couple of contacts and lets go a right that touches the intersection. Sassuolo resists with the Rossoneri who continue to push and at 16 ‘Diaz kicks from the edge with a first intention, but the ball comes out a little. The neroverdi are always ready to restart anyway and at 23 ‘Kyriakopoulos enters the area where he is spread by the duo Florenzi-Saelemaekers. The referee Ayroldi has no doubts and indicates the 11 meters, but Berardi is saved from the spot by Maignan. Despite the mistake, Dionisi’s team does not lose heart and goes close to the advantage first with Frattesi who ends over the crossbar and then with Kyriakopoulos who kicks a short kick from Florenzi but does not find the door.

At the beginning of the second half Sassuolo lost Berardi due to injury. At 52 ‘Gregoire Defrel enters after the winger had to leave the field accompanied by the medical staff following a disastrous fall after a contact with Theo Hernandez. At 54 ‘Sassuolo is still dangerous with Thorstvedt who kicks powerful diagonally, but Maignan is careful. Pioli makes a triple change and inserts De Ketelaere for Diaz, Messias for Saelemaekers, and Tonali for Pobega.

Milan starts to push again and in the 66th minute a ball from Leao cuts the whole small area, Messias on the far post puts it back in the center, but Giroud doesn’t get there. Shortly after, the Portuguese star twice, in the 70th minute Messias finds Leao in the area, but the winger completely misses the ball with Erlic who puts in a corner, then a minute later on the developments of a corner, Leao stops at the far post and kicks of power, but rejects the green-and-black defense. Dionisi’s team closes and Milan fails to break through and after 8 ‘of recovery the match goes goalless.