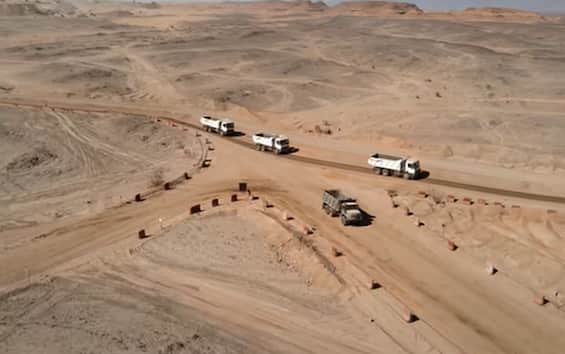 It is called “The Line” because it was designed as a long line that crosses the desert. According to its creator, she wants to be the crown prince of Saudi Arabia Mohammed bin Salman, the greatest “smart city” in the world. Five years after the announcement of its construction, the first photos from above have circulated showing trucks and excavators at work in the desert in the Tabuk region in the north-west of the country. This is precisely the Neom project, a crasis between the Greek word “new” and the Arabic word “future”, and the foundations of the city, which raises doubts and perplexities.

Mohammed bin Salman first presented the project in 2017, stating that he wanted to build the metropolis in the desert along a 170km long, 200m wide and 500m high line. As big as the state of Massachusetts, Neom would be in the plans of the Saudi politician. capable of accommodating 9 million people. To distinguish it from the absence of cars and roads, except for a via ferrata. The only traditional means of transport will be a train that will cover the entire length of the city in just 20 minutes. The urban planning of “The Line” has been designed to reduce emissions and to travel on foot with a total investment of 500 billion dollars. Ot Sky, a Saudi company specializing in aerial photography, has released the videos for a first reconnaissance from above on the fault where the operations are concentrated.

A zero-emission oasis or a high-impact cathedral in the desert? The debate is open among the experts. Starting with Philip Oldfield of the University of New South Wales who questioned the plan’s viability and sustainability. The goal set by bin Salman had been that of 2025 for the completion of the works. The most skeptical have found partial confirmation of Neom’s impracticability in the enormous construction delays. Until the recent release of the photos, there was no news on the evolution of the project which, from what can be seen, seems to have started but still far from the finish line.