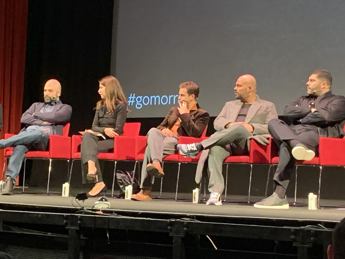 “Is there only evil in ‘Gomorrah’? Far from it! It is precisely that darkness, it is precisely those shadows, which allow us to glimpse the light of good. But it is it is crucial that there is no positive hero, it is crucial describe evil apart from good: the mechanism consists precisely in not giving the viewer ‘already chewed food’ … “. This is what the writer explains Roberto Saviano, author of the novel ‘Gomorra’ from which the tv series on Sky, speaking at the Brancaccio theater in Rome at the presentation of the final season.

Is evil destined to win in the absence of good? “No – underlines Saviano – The protagonists are already defeated and they themselves know it; their power reveals and recognizes at the same time their powerlessness to make it: those who act like them know they have already lost, seizing a dramatic destiny “.

But, he adds, “the presence of the state, be it through justice or prison or the police, it is articulated exactly from the criminal point of view, not from that of the citizen-viewer. Risk of emulation? Nobody became a Camorra player after seeing ‘Gomorra’, just as no one became a priest after seeing ‘Don Matteo’ … “, Saviano replies the recurring controversy.

But, having reached the end, how much is left of the original trace marked by the novel and how much could be inserted after the series in a hypothetical novel revised, corrected and integrated? “From the story of the book new stories are budded and only a seriality could allow it – observes Saviano – But the narrative was built to tell about our time, money and power, the philosophy of ‘either you screw it or you are screwed’, without giving respite, even from the point of view of language, a strict Neapolitan dialect instead of the Italian language “.

Thus, “the spectator is told: ‘here is your country, here is your world in your time’, which cannot be reduced to a symbol or a gesture”. Remembering that “just seeing that criminal world and by telling it, it can be dismantled, giving a tool to understand that evil. If you decide to light up a fragment of truth, it is to make it emerge and no longer keep it in the shadows. Moreover, with the feuds in progress, the criminal horizon of the story is absolutely topical “, underlines Roberto Saviano.