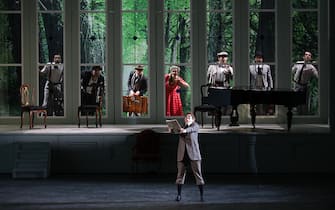 Ariadne auf Naxosthe most original result of the collaboration between Richard Strauss and Hugo von Hofmannsthal, is back on stage at La Scala for 5 performances from April 15th to May 3rd marking the debut on the podium of Piermarini’s Michael Boder and the Milanese arrival of the successful show signed by Sven-Eric Bechtolf for the Salzburg Festival and then for Vienna. The resumption of the direction is curated by Karin Voykowitsch. PHOTO: Brescia – Amisano

The cast sees the return in the role of the protagonist of Krassimira Stoyanova, an anticipated debut from Scala in the part of Erin Morley’s Zerbinetta and the voice of Stephen Gould in the part of Bacchus / Heldentenor. The distribution of the other roles is also prestigious, from Sophie Koch’s Komponist to Markus Werba’s Musiklehrer up to the Najade / Dryade / Echo trio entrusted to Caterina Sala, Rachel Frenkel and Olga Bezsmertna. The staging uses sets by Rolf Glittenberg and costumes by Marianne Glittenberg. Photo: Brescia Amisano

Scala, the Gala in memory of Carla Fracci

In the first version, set in a theater, Strauss and the librettist Hugo von Hofmannsthal had conceived the work in two parts: a prose prologue representing the agitation that takes the actors before a show (reproducing the second part of the ‘ Bourgeois Gentilhomme ‘by Molière), and the simultaneous staging (in the musical opera itself) of two shows, a Greek tragedy and a farce of the commedia dell’arte. PHOTO: Brescia – Amisano

Scala, the concert for peace

The limited success of the debut in Stuttgart in 1912 had suggested the authors to prepare a second version in which Molière’s text was replaced by a prologue in music: in this definitive capacity the work, set this time in a Viennese palace, was staged at the Hofoper in Vienna in 1916. The show by Bechtolf was born on the second version, but with references also to the first. PHOTO: Brescia – Amisano

“It is an opera with few musicians, yet it makes a crazy noise!”, Underlines the superintendent Dominique Meyer at a press conference. And on the protagonists: “Krassimira Stoyanova has a voice of sugar, soft as her cream. Erin Morley has a sophisticated, pure, crystal-colored voice”. Photo: Brescia – Amisano

“The score is one of the most refined – Maestro Michael Boder underlined at the press conference – Despite being performed by a small ensemble, Strauss manages to make many colors felt. And every sentence, even the most serious one, always has an idea behind it. of humor “. PHOTO: Brescia – Amisano

“Strauss uses his voice as if it were an instrument, as a part of the orchestra”, observes the protagonist of Krassimira Stoyanova, who at La Scala has already played the character with great success in 2019 (directed by Frederic Wake-Walker, conductor Franz Welser -Moest). And she adds: “It is a work that mixes tragedy with comedy”. Photo: Brescia – Amisano

“Strauss was also trying to find a brilliant sound for the tenors and for the colors of the orchestra. It is not true that he did not like tenors”, emphasizes Stephen Gould in the part of Bacchus / Heldentenor. PHOTO: Brescia – Amisano

“The last time I came to Milan was 16 years ago. I came here just to see Ariadne. I am very grateful and happy with this debut,” reveals Erin Morley (Zerbinetta). Photo: Brescia – Amisano

The setting, which brings the story back to the time of the composition of the opera, makes use of the elegant scenes by Rolf Glittenberg and the sophisticated costumes of Marianne Glittenberg, and well returns the coexistence in the score of melancholy and ironic elements (electric scooters, the gaudy costumes) as well as the homage (once again mocking) to the music itself, with crashed pianos placed to represent the island of Naxos. PHOTO: Brescia – Amisano