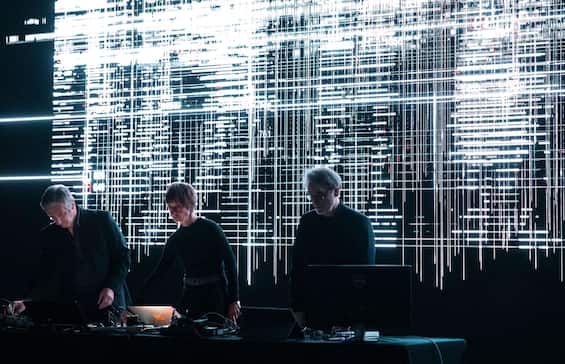 
In these images we see some moments taken from the audio-video performance SCANAUDIENCE represented at the LEV FestIval 2019 in Spain, at the Philharmonie de Paris for the Biennale Némo 2021 and at the Mutek Festival in Montreal in 2022. SCANAUDIENCE is a performance based on scanning the audience in time real. This project uses the “Extrascan” software network that we have specially developed. In practice, it is a digital scanning system capable of “reading” the characteristics of any object, architecture or living being and translating them into sound and video images.

SCANAUDIENCE is based on the projection of a sequence of moving horizontal and vertical lines that cross the audience in the room. The light lines act like those of a normal document scanner, reading the characteristics of each individual viewer, such as color, size, shape. In addition to the technical detection function, a sort of constantly evolving luminous choreography is created. The passages are initially slow and then develop in progressive accelerations, creating a succession of abstract textures on the screen

simultaneously with the generation of sound. In some moments the scan is limited to detailed details of the public, thus also highlighting the contribution of the individual spectator. In others we interrupt the succession of lines with very short flashes that illuminate the audience as a whole, like a reset that brings visual memory back to its initial state. Four digital cameras designed by us follow the movement of the lines and send the scan data to the computers on stage. Through our software this data is transformed into sounds and images, using algorithms that we can control and modify during the performance. Each of us deals with managing a part of the software and mixing the

sounds and images that are generated in real time. The result of the image processing is projected onto the screen, and the sound processing is broadcast throughout the room. In this way each person generates original visual and sound elements, bringing their own and unique contribution, becoming the real protagonist. The public can also actively interact with the scan. For example, with the movement of the body or the arms, everyone can generate significant variations in the image and sound and thus further influence the evolution of the performance. Each individuality thus finds its space in a collective expression, effectively reversing the conventional role between the artist and the public. For example during the Montreal performance the audience interacted very actively with the scan. We would see hands raised from the stage and even a couple kissing to see the effect on screen. And it is precisely this direct reaction from the audience that completes our work.

For us, every time we represent SCANAUDIENCE it is a new experience, direct contact with people of different nationalities, cultures and customs. A sensorial exchange which through the scanner contributes to the utopia of a universal sound. SCANAUDIENCE opened the LEV FestIval 2019 in Spain, was presented at the Philharmonie de Paris for the Biennale Némo 2021, at the Mutek Montreal 2022 festIval, at the ACT Festival 2022 in Korea of the South.