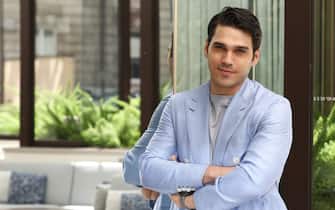 Giuseppe Maggio is Nick Di Maggio one of the protagonists of School of Mafia. The Roman actor, who also worked in the series Baby And The company of the swanhere is a guitarist and singer who is about to embark on the path of the talent show while his mafia-like family has completely different plans for him

Guglielmo Poggi, recently in the cast of Circeo, is Joe Cavallo, also the son of a boss with the dream of joining the police. He too will be brought to Sicily to receive a different education

Michele Ragno, already appeared in 1994is Tony Masseria, the son of a boss who, far from Sicily, is a dance teacher

School of Mafia, the trailer for the comedy with Nino Frassica

The actors who played Mafia bosses in the movies

Fabrizio Ferracane is the Primo Di Maggio boss, Nick’s father. He also did not closely follow the growth of his son

Paolo Calabresi is the boss Vito Masseria, the father of Tony the dancer

When Paolo Calabresi took advantage of the similarity with Nicolas Cage. PHOTO

Maurizio Lombardi is Salvo U ‘Svizzero, Don Turi’s right arm. The man, who would like to imitate the great mobsters of TV movies, is too sophisticated and eccentric to be credible

Venice 79: Maurizio Lombardi, a master of style and acting

Nino Frassica plays Don Turi, known as U ‘Appicciaturi, in charge of giving “mafia lessons” to the three children of the bosses

Nino Frassica from the beginning to today, all the films and TV programs. PHOTO

Gianfranco Gallo is Don Masino Mazzarò, Don Turi’s half-brother who aspires to be part of the “family”

Tony Sperandeo is Frankie Ghost, the boss whose death the story begins

Giulia Petrungaro is Rosalia, the rebellious daughter of Don Masino

Monica Vallerini in the film is a network specialist

In the photo, the director Alessandro Pondi. Born in Ravenna in 1972, he gained a long experience in cinema, television and theater, specializing in the genre of comedy on the big screen