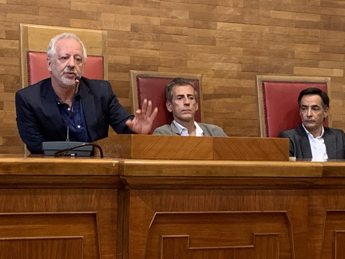 A judge against the mafia, Cesare Terranova. The first magistrate to have sensed the danger of organized crime and to have instructed the first trials against mafia bosses, when the word mafia was still spoken in a whisper. Or there were those who made fun and said it was “an invention of the Communists”. Terranova was killed on September 25, 1979 with his collaborator, Marshal Lenin Mancuso. His name, however, is among those that have fallen into oblivion. Now the director Pasquale Scimeca has decided to give voice and face to Judge Terranova and Mancuso, telling their story in a film. The protagonists will be the Palermo Gaetano Bruno, who will play the magistrate and Giuseppe Mazzotta, known to the general public for having played the inspector Fazio in Commissioner Montalbano di Camilleri, who will do Mancuso.


The announcement was made today, in the courtroom named after terranova, at the courthouse in Palermo, in the presence of the director, the two actors, but also the judge’s nephews, Vincenzo, also a magistrate, and Francesca, as well as Carmine Mancuso, son of Lenin. And Leonardo Agueci, former Deputy Prosecutor of Palermo, born in Petralia Sottana, in the Madonie, exactly like Terranova, whom he got to know.

“I already made a film 22 years ago about another mafia victim, Placido Rizzotto, who until then was unknown to the general public. Judge Terranova is better known, but he was not valued enough – says the director in a interview with Adnkronos – Yet, he was a fundamental judge in the history of the fight against the mafia. He is the missing link in the narrative. There are a series of films and books on the war and then we move directly to the Eighties, from the maxi Falcone and Borsellino. But in the middle there are the figures of Terranova and Mancuso. It is they who, in a solitary way, set up the idea of ​​fighting the mafia, not as a gang struggle, but as a unitary organization. the first two maxi-trials, that of Catanzaro and Bari. This film will try to fill this gap “.

But who was Cesare Terranova? He set up the first trials against the Corleonesi clan, in particular against Luciano Liggio and Totò Riina. But Liggio and all the others were acquitted for “lack of evidence”. Liggio was then brought to trial again and sentenced to life imprisonment for killing the Corleonese boss, Michele Navarra. And all this took place in a historical moment in which the mafia-like association and art. 416 bis had not yet been introduced into the penal code. On 25 September 1979 the mafia killed Cesare Terranova with his trusty Lenin Mancuso. That day the magistrate left the house at 8.30 to go to work at the Palermo Court of Appeal. Together with Lenin Mancuso he got into the car and started driving. Shortly after, the car was flanked by some killers who, with large caliber weapons, opened fire. Terranova died instantly while the escort officer died in hospital after a few hours.

The motive for the murder of Judge Terranova and the escort agent was reached thanks to the first statements of collaborators of justice such as Tommaso Buscetta who, in an interrogation before Giovanni Falcone, told that Liggio was the instigator of the Terranova murder to take revenge of the life sentence that the judge had inflicted on him in 1975. Thesis confirmed also by the repentant Francesco Di Carlo, according to which the Corleonese boss is the principal and Leoluca Bagarella, Giuseppe Madonia, Giuseppe Gambino and Vincenzo Puccio the executors. Behind the judge’s murder was not only Liggio’s revenge, but also a preventive murder, by Cosa Nostra, to nip in the bud the work that Terranova could have done against the mafia at the Head of the Education Office in Palermo.

“These broken lives have a meaning only if they remain in history – says the director Scimeca – they must become a heritage of knowledge. I hope that the figure of Terranova and Mancuso can reach the new generations”. The film will also tell two figures who played an important role at the time: that of the deputy brigadier Agostino Vignali, an extraordinary figure, and of Colonel Ignazio Milillo. “Cesare Terranova’s nephew, Vincenzo Terranova, President of the Court of Assize in Palermo, in his speech he recalls the figure of the judge killed by the mafia: he loved to listen to others, he had the ability to never start from a preconceived idea “. For two years Terranova has moved to Palermo, from Rome. “I came to Palermo – he explains – because it is a bit like continuing his work, for us working in Sicily is a huge stimulus”.

Carmine Mancuso remembers the figure of his father, Lenin. “He was not the driver of Judge Terranova – he remembers – as is erroneously said by many. He was a policeman who worked with him”. And Leonardo Agueci, a profound connoisseur of the figure of Terranova, explains: “I got to know him as a boy and if I chose to be a magistrate I owe it to him. He was my model”. And he remembers that he was the “first magistrate to place the mafia as a criminal phenomenon. Because at that time no one talked about the mafia, he was the first to do so. The mafia was seen almost as a charitable organization, it had references to society , from aristocracy to politics “. The actor who will play him, Gaetano Bruno, from Palermo, says: “Terranova paid with his life for his commitment against the mafia and left a great legacy”: While Peppe Mazzotta, who will be Lenin Mancuso, says: “He is a quite original story, many surprising elements will emerge “. Filming will begin in a few weeks. And they will leave from Petralia Sottana, where the judge was born and raised. And then they will continue to the Palace of Justice in Palermo. (by Elvira Terranova)