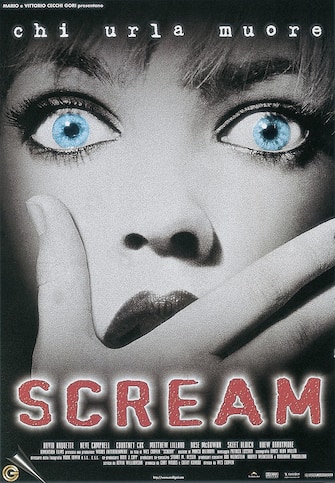 WATCH THE VIDEO: Scream, the Italian trailer of the reboot

To celebrate the fifth chapter of the saga, we can only start from the first. Released in theaters in 1996, Scream is a milestone in the slasher genre for its ability to analyze it, play with stereotypes, overturn them. If in fact Ghostface Killer is the typical killer armed with a knife, Sidney Prescott is far from being a simple and banal Scream Queen. From damsel in distress, the protagonist played by Neve Campbell, she becomes the heroine of a saga that does not seem to want to grow old

Scream, the poster for the new movie

You say Slasher and you think of Halloween, Michael Myers, the mother of all scream queens, Jamie Lee Curtis. Released in 1978, Halloween is not the first film of its kind but it is probably the one that most identifies and represents it, if there is one. Its success has led to a long saga that in 2021 will see its twelfth chapter with Halloween Kills (also considering Halloween III – The Lord of the Night of 1983 in which Michael Myers is absent and the reboot and its sequel signed by Rob Zombie) . In 2022 we will reach 13 with the film with Halloween Ends

Nightmare – From the depths of the night, Wes Craven, 1984

Netflix: Freddy Kruger will also be in Stranger Things 4

Just as he did twelve years later with Scream, also with Nightmare, Wes Craven innovates the genre of the slasher movie, skilfully mixing the thriller element with the paranormal one. Freddy Kruger is a killer who strikes his victims in their sleep, indeed, in their dreams. A nightmare that becomes reality in an awakening that never happens, between torn pillows and powerful spatters of blood on the ceiling (like the one that marked the film debut of a very young Johnny Depp)

The 42 Scariest Movies Ever Made

Friday the 13th tells the story of a cursed campsite where a series of heinous and mysterious murders take place. The saga will become famous for the killer Jason Voorhees, but the first chapter has another killer. Only in the following films will Jason become the protagonist

Slasher par excellence, Do not open that door contains all the typical ingredients of the genre: an abandoned hut, a group of people who stop unaware of what they will encounter, a family of crazy omics with a component that uses an electric saw to (literally) reaping its victims. Low budget film, Don’t Open That Door will become a real hit and its protagonist Leatherface will be a horror movie icon

And with this we are three Craven films out of 10, a good haul, no doubt about it. Described by critic John Kenneth Muir as “a turning point in the horror genre”, The Hills Have Eyes tells the story not of a family that in the middle of a journey finds itself dealing with a family of cannibals. Craven, however, also has fun here playing with genre cinema (characteristic of all his film production) and mixing road movies, revenge movies, slasher and westerns

Phenomena tells the story of a girl (a very young Jennifer Connelly) who during her sleepwalking episodes has visions that show her some heinous murders, mixing paranormal elements with a more realistic, typically slasher component. Of all the films he has made, he is the favorite of maestro Dario Argento, and it must mean something.

The great success of Scream led to a resurgence of the slasher genre in the second half of the 90s. Urban Legend, from 1998, is one of the titles that tried to exploit the long wave of Craven’s masterpiece. Beyond a rather classic plot that sees an ax-wielding murderer tear his young victims to pieces, the film stands out for a cast that brings together a number of teenage idols: Jared Leto, Joshua Jackson, Tara Reed. While not meeting the favor of audiences and critics, Urban Legend has become a cult

Jeepers Creepers, a 2001 film, is a paranormal slasher. The plot sees a pair of brothers stumble upon a suspicious episode along a deserted road. The two decide to investigate and this ends up costing him dearly. In fact, every 23 years, a monstrous creature, the Creeper, wanders around the area, killing people to feed on their organs.

Released in theaters in 2012, Quella casa nel bosco is not simply a top quality slasher but one of the best recent horror movies ever in terms of writing and production level. The film, directed by Drew Goddard who also wrote the story together with Joss Whedon, has an extraordinary ability to retrieve all the stylistic features of genre cinema by reinterpreting and modernizing them in his own way. A little gem, a rare gem, highly acclaimed by critics