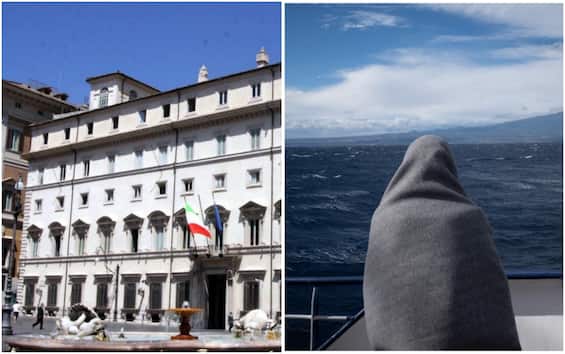 The Council of Ministers, in the evening, examines the package of rules on immigration. Among the hypotheses the possibility of carrying out a single rescue and the prohibition of transhipments, with penalties that would be gradual, from the suspension to the confiscation of the vessel. Ilva and a decree law on strategic sites of national interest are also on the agenda

The Council of Ministers dedicated to the package of immigration regulations is underway, with the new code for NGOs engaged in the search and rescue of migrants at sea. Also on the agenda is a report from the Minister of Business and Made in Italy on the economic status of Ilva and a possible decree-law on strategic plants of national interest. Instead, they would be postponed to next week, according to reports The Corriere della Serameasures on gender-based violence and the fight against baby gangs (GOVERNMENT: ALL NEWS LIVE).

A single aid and the penalties

At the party for the tenth anniversary of the Brothers of Italy, the Minister of the Interior Matteo Piantedosi had announced a “code of conduct” for NGOs with “more effective sanctions than those in force, which have been weakened by the legislator to the point that the visit of a doctor on board to cancel the action of the Government”. The hypothesis on which the Viminale is working is that humanitarian organizations can carry out a single rescue, immediately informing the authorities and asking for it to land in a safe port. To make this provision effective, transhipments from one vessel to another would also be prohibited. The migrants on board will then have to be asked if they intend to apply for international protection, so that the ship’s flag country will take charge of it. According to Il Corriere della Sera, the provision on the subject of NGOs would provide for gradual sanctions, ranging from a 20-day suspension to the confiscation of the ship, with fines of up to 50 thousand euros.

Decisions on gender-based violence, whose measures will integrate the Red Code, would be postponed by a week. The end of the legislature interrupted the progress of the bill finalized last year by ministers Marta Cartabia and Luciana Lamorgese, which provided for, among other things, the mandatory arrest in some cases even without flagrante delicto, prison for those who tamper with the electronic bracelet and the expansion of the superintendent’s reprimand tool for stalkers. The government is studying the extension of the cases in which the warnings of the police commissioner are foreseen and more severe penalties for those who violate the provision, as well as a further tightening on measures to prevent the escalation of violence such as the prohibition of approaching places frequented by the victim .

Among the hypotheses under study and which could also be postponed to next week, the daspo for minors, to stem baby gangs: the measure would prevent them from frequenting some areas, public places and nightlife areas. Since a frequent component are chats and social networks, which serve to organize the pack and also as a stage – as emerges from a recent research by the Transcrime center of the Catholic University, the Department of Public Security and that of Juvenile Justice – it is also the ban on the use of cell phones.