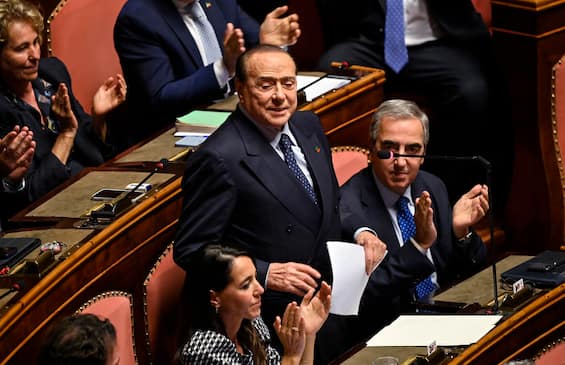 It is the first speech since 2013 at Palazzo Madama by the leader of Forza Italia, who was then dismissed from the Senate due to the effects of the Severino Law. In his explanation of vote, in view of the confidence in the government, he used sentences of unity towards the executive and also references to his historical battles, such as justice and the tax authorities

Nine years of waiting, a welcome back from President Ignazio La Russa and then the floor. “Mr. Prime Minister, I am happy to be here and I am also happy because my 17th grandchild was born 3 hours ago. Hurray!”, Declared Silvio Berlusconi, mentioning in his speech on the explanations of vote for the confidence in government Meloni (THE SPECIAL – THE UPDATES) also the birth of the second son of his son Luigi. “It remains a reason of great satisfaction for me to speak again in the Senate, after nine years, and to do so just when the Italian people have once again chosen to entrust the government of the country to the center-right coalition.” ‘former Cavaliere, who in 2013 had been expelled from the Senate due to the Severino Law, which provided for forfeiture in the event of a definitive sentence.

Loyalty to the executive

In his speech, Berlusconi highlighted the pride of having given birth to the coalition which later proved successful in the elections. “If today for the first time at the helm of the government of the country, by decision of the voters, there is an exponent who comes from the history of the Italian right, this is possible because 28 years ago a plural coalition was born, in which the right and the center together have been able to express a democratic project of government for the nation. A coalition that in 28 years has never divided and that has been able to govern together and stay together with the opposition, a coalition that has led and guides the majority of Italian regions. A coalition, which has always been the architect of great choices of democracy and freedom ”, declared the blue leader. Loyalty to the Meloni executive, where there are ministers belonging to Forza Italia, is not in question. “Today we will vote with conviction and from tomorrow we will work with loyalty, with passion and with a constructive spirit, to carry out our program”, he declared. The memory of President Berlusconi also went to his first speech to the Senate, in 1994, when he asked for confidence in his first executive. “So, in this same classroom, asking the Senate for trust in the first center-right government, I concluded my speech by talking about the possibility of dreaming, with eyes wide open, of our better future, I talked about the possibility of building a more just Italy , more generous and more solicitous towards those in need and towards those who suffer, I spoke of a more modern and more efficient Italy, of an Italy that is more prosperous and more serene, more orderly and safer ”, highlighted the senator.

A reference to foreign policy is inevitable, after the audio that cast some doubts on the ideas of the Forza Italia leader. “I have always been a man of peace and my governments have always worked for peace and always in full agreement with those responsible for the government of Europe, NATO and the United States,” said Berlusconi. “My project, the hopes of many, were then to recover Russia from Europe. This we planned to be able to face together with a West strengthened by Russia’s contribution to the great systemic challenge of the twenty-first century, that of dangerous Chinese expansionism. Unfortunately, the invasion of Ukraine has nullified our plan, because we went back to before 2002, with Russia isolated from Europe and with Europe and the West united against Russia “, stressed the leader of Forza Italy. Support for the Ukrainian cause is clear. “We, of course, in this situation can only be with the West, in defense of the rights of a free and democratic country like Ukraine. We must work for peace and we will do so in full agreement with our Western allies and with respect for the will of the Ukrainian people. On this, our position is firm and convinced, it is absolutely clear and cannot be doubted by anyone, for any reason “, declared the Italian senator.

Berlusconi’s ideas are the same as those expressed in the Chamber by Prime Minister Meloni. “I heard from President Meloni definitive and totally shareable words on rights, freedoms, on the need to lower taxes and to promote fiscal peace, a commitment to immediately face major emergencies starting from the need to lower energy costs to families and businesses, taking up an energy policy no longer conditioned by the “no party” and the ideological environmentalism of the left. Above all, we have the duty to move forward, because we are faced with new emergencies which are a cause of serious social alarm. Businesses and families are in trouble and are asking for help. We cannot leave them unanswered, ”said the former prime minister.

In the speech of the Forza Italia leader, a reflection on the tax issue could not be missing, a theme felt both within the party and within the majority coalition. “One of the priorities to be approved as soon as possible is the reform of taxation, for a fairer and lighter tax, despite the need not to disregard the budgetary constraints that Europe and the markets impose on us,” said Berlusconi.

The reform of justice

In the speech of the former Knight there is also a reflection of justice, a concern of the Forza Italia leader. “The reform of justice is also an indispensable priority, for a matter not only of reasonable length of the trials and I remember that the trials for a first degree sentence in Europe take 1020 days, apart from Holland, 98 days at most one year and for this reason, hearings should not be scheduled after 3-4 months but the week after or at the latest after two weeks. We have to do it out of a question of civilization and freedom. A truly guaranteed reform, not against the judiciary but for the right, for fairness, for freedom ”, declared Berlusconi.

Another theme touched by the president of Forza Italia during the election campaign was that of the family. Therefore, a reflection on the subject of the birth rate could not be missing. “In our decisions we must then put the person at the center of everything, the bearer by nature of rights that are not granted by the state, but which the state has the duty to guarantee and protect. We are therefore for the protection of life, from conception to natural death, we are for the support of the birth rate, we are for the defense and enhancement of the family and its indispensable social function. These are all issues on which our government, I am sure, will be able to intervene with courage, and with a sense of responsibility ”, concluded Berlusconi.