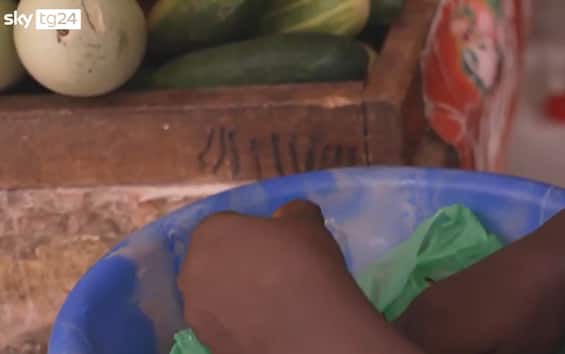 Kolda, Senegal: With a poverty index of over 68%, this is one of the three poorest regions in the country.

“Here we transform all the local products. During some periods there is an abundance of products that are left to rot, when they are rotten they can no longer be eaten and therefore we transform them so that we can use them. It would be a shame to waste them so we recover them so as not to throw them away and to keep them. We also transform them to help the population eat healthy” Daria Balde tells us. She was born and raised here, and here she has remained to live with her husband and children who support and help her in a project as ambitious as it is important: her grocery store with annexed laboratory, where she gets the products that her land gives away and that without his intervention they would remain there to rot. Pasteurizing and creating new flours has become her occupation and her passion; a passion that gives work to many people, a passion born and raised thanks to a training course of the Arsmais project financed by the Italian agency for cooperation and development and developed by various organizations, including Arcs, Tamat and Amref, in different regions of the country.

“Every year over 15 million euros are financed on these issues, divided between aid credit and donations. Projects focus more and more on achieving collective, concrete, measurable results” explains Aldo Cera, deputy owner of the headquarters of the Italian Agency for Development Cooperation in Dakar.

From the smallest to the largest companies. Like Batouly, a local products processing company born in Thies in 2016 in a garage thanks to the perseverance of Mariama Deme. She started out on her own, now has 12 employees. With other producers it is organizing itself to defend local products.

“As regards raw materials, we are developing what is called the value chain. Going directly to the producer, buying and thus fixing the raw materials of Senegal. Because now there is the trend to export our products. So we really need to organize ourselves to keep the raw material local” says Mariama Deme, engaged with others in the defense of local raw materials.

With the prices of raw materials doubled, in some cases tripled, the effects of the war in Ukraine reach even where bombs are not heard exploding: that is, in the poorest countries that depend on grain imports from Russia and Ukraine.

This is the case of Senegal which imports 55% of its grain from the two warring nations. The promotion of local products, therefore, and their processing is the way to follow to buffer a major food emergency but also to create an economy in the country that does not depend, at least not so much, on imports.

“Senegal has made it a national priority to reduce import dependency and balance the trade balance and preserve food security. The war in Ukraine, therefore, represents a serious threat to food security” explains Cera.

Legumes, potatoes, cereals, fruit, vegetables, there are many products that are grown in Senegal, crops almost never destined for the local population who often do not even know how to use them.

This is how Daria explains the nutritional values ​​of food and the importance of eating healthy to the women in the villages.

“We organize local awareness campaigns. At the moment, as social enterprises, we produce enriched flours, enriched flour is a combination of several flours, we take the different types of flour, mix them and in several cases we donate them to families with malnourished children”

Tomba Souane is a nurse, responsible for Amref projects. For years he has been fighting child malnutrition and fighting for food self-sufficiency.

“The world crisis has had a huge impact on Africa, in these conditions African countries cannot survive. There is a need for food self-sufficiency, there is a need to return to agriculture to allow the population to consume local products” he explains.

Food independence is an opportunity not only for poor areas but for the whole country; here, on the border with Guinea Bissau, it is in the schools and villages that action is taken to educate about healthy eating, made with local products. And it is the work carried out by teachers and volunteers in village schools.

“If even one child assimilates and transmits this information, even at home, when he says to his younger brother or mother “be careful, don’t eat it, it’s not good” then we have achieved our goal” explains Abdoulaye Diao. He has been teaching for several years in the country’s schools, in often forgotten places, he also addresses the youngest to speak to families.

This is how Senegal presents itself as a model, and as a pivot. Its stability is a boost to all of the sael.

“Countries like Côte d’Ivoire and Senegal are fundamental for the maintenance of the population, for goods and services. It is important that throughout the salt there is an integration and a strengthening of policies says Nadia Zangarelli, project manager of Tamat currently engaged in Mali.