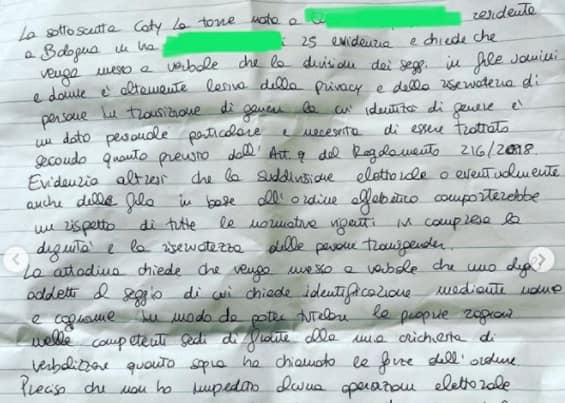 The lawyer and activist for the rights of the LGBT community protested on social networks against the division between genders that “violates the privacy and confidentiality of trans people so forced to come out in front of everyone”. Insulted at the polling station, she sued the teller

“There is the register of the electoral lists pink for women and blue for men! And then there is a law of 1947, never repealed, which establishes that in the electoral lists the woman is also identified with the surname of her husband”. Thus begins the post denouncing the lawyer and activist for the rights of the LGBT community Cathy La Torre who today at the polling station where she went to vote in Bologna asked to record the division of the row into men and women and for this reason “insulted” by a teller. You announcing that you have sued one of the tellers. “A teller has insulted and defamed me in front of everyone – writes Cathy La Torre in the post – I enter, I ask to be able to verbalize that the division in rows between males and females violates the privacy and confidentiality of trans people so forced to come out in front of all”. The seat is number 16 in Bologna. “The president tells me that I ask for it every year but it never changes anything, I reply that if I am voting it is because I still believe that she serves and I think so for every single battle”, she continues.

The intervention of the police and the lawsuit

The “insistence” of La Torre would thus have led a teller to request the intervention of the police, as told by the lawyer herself. “Not happy”, he adds, “slanders me by calling me crazy loudly.” La Torre has thus decided to proceed with the lawsuit. “That a polling station is so abused of power and law is a fact that we cannot accept – she comments – The men and women queues are harmful to the privacy of those who are making a gender transition and I’m not crazy if I ask to put it on the record. “. To the post on Facebook, the lawyer also added the photo of the handwritten report, in which she emphasizes “I specify that I have not prevented any electoral or voting operation, but I limited myself to requesting the minutes during my observation as required by the current electoral law “.