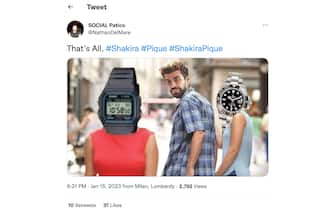 Shakira, Piqué, Clara, the Twingo, the Ferrari, the Casio, the Rolex… the famous Colombian singer has managed to create an incredible soap opera thanks to her song BZRP Music Sessions #53. And between Casio vs Rolex-themed TikTok filters and avalanches of comments on this saga of revenge served as hot as the muffler of a Twingo, memes also abound. Photo credits: NathanDelMare/Twitter

VIDEO Shakira, the song in loop and the witch towards the mother-in-law

The reason for the ire set to music by Shakira seems to be the alleged betrayal of him, when the two were still an official couple and, it was thought, happily married. And here around the world murals, posters and themed drawings appear, such as the one depicting the two in version Mr & Mrs Smith, the film in which Brad Pitt and Angelina Jolie are husband and wife but also spies in charge of killing each other. Photo credits: cesardeluxe/Twitter

VIDEO Shakira, 8 curiosities about her

Political memes could not be missing, such as the one that appeared on Twitter in which the PCI is compared to the Rolex and the PD to the Casio. Photo credits: NicolaRiccard10/Twitter

Even the famous photo of the boy holding the sign raised high could not fail to welcome a Shakira-Piqué-themed phrase. Photo credits: Andr34_82/Twitter

Clara Chia Marti, who is the girlfriend of Gerard Piqué mentioned by Shakira in the new song

Even the various Italian dialects joined the chorus online, singing them to Piqué (and paraphrasing Shakira) in the various vernaculars. This is the case of the Calabrian. Photo credits: nmrpmst91/Twitter

Shakira and Piqué, on TikTok there is the filter that tells you if you are a Rolex or a Casio

And there is also a quote from the “BugoMorgangate”, what happened in Sanremo between Bugo and Morgan in 2020. Photo credits: PonzErica/Twitter

Even a mash up between Mario Draghi and Shakira peeps out on Twitter. Photo credits: grande_flagello/Twitter

Shakira’s song against Piqué, lyrics and meaning of Music Sessions #53

Ferrari and Twingo are the other two great protagonists of memes, after Rolex and Casio. Photo credits: damar00155/Twitter

The cartoon depicting a Rolex and a Casio competing in performance shots is going around the globe. Photo credits: Killer_Quake/Twitter

The typical photo of the meme with the two fighting in the background and the guy in the foreground posing could not be missing. Photo credits: ClasicoYa/Twitter

On the net it has been noticed how the Rolex is almost always brought up when two separate, between Totti and Ilary Blasi and Shakira and Piqué. Photo credits: LaPaoEmme/Twitter

A thousand memes also appear starring teddy bears greedy for honey, to reconnect with the fact that it would have been a jar of jam that aroused Shakira’s suspicions of a betrayal. Photo credits: stopridingmyD/Twitter