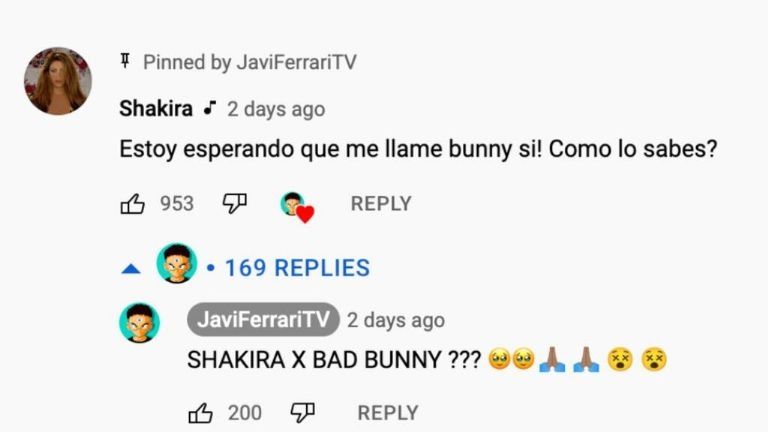 Colombian singer Shakira The 45-year-old is more active than ever on social networks in the midst of her divorce with Gerard Piqué, with whom she was in a relationship for more than a decade and had two children in common, Milan and Sasha, custody that is at stake these days.

While Shakira He tries to close agreements with his ex and start 2023 in the city of Miami, a place he chose to live from now on and thus enhance his career, he does not stop working. Just a few days ago she premiered the song ‘Monotonia’ with Ozuna and currently heads the ranking of the most listened to songs in the world.

The truth is Shakira She is delighted to collaborate with her colleagues and now it was learned that she could release a song with Bud Bunny, a benchmark for urban music. Everything arose as a result of a comment made by youtuber Javi Ferrari, in one of his most recent broadcasts.

” Shakira: call Bad Bunny. You only need Bad Bunny”, Javi Ferrari said in his broadcast after talking about the success of ‘Monotonía’ and the singer, who is very attentive to everything that is said on her network, replied immediately in the comments of the YouTube platform.

“I’m waiting for him to call me Bunny, yes! How do you know?” she wrote to him Shakira to Javi Ferrari and in this way he announced to his fans from all corners of the world what he will premiere next for them. In a parallel way, Bud Banny tweeted two flags, one from Colombia and the other from Puerto Rico, next to a telephone and hinted that he is already in charge of calling the interpreter of “Ojos Así” so that they work together.