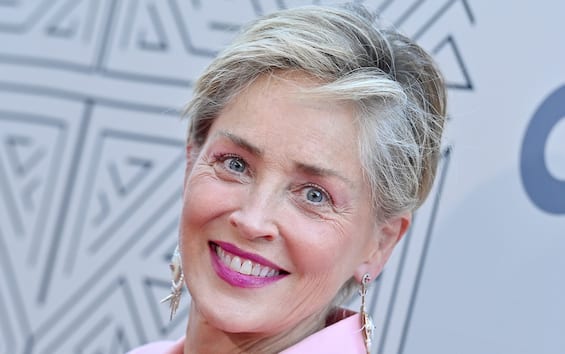 Sharon Stone has become a painter in her own right: the actress, 64, after a career of screen and television successes such as films basic instinct And Casino and TV series Ratched And The Flight Attendant he converted a room in his Beverly Hills mansion into a studio to work on large canvases.

Painting is becoming the number one item on his CV, as evidenced by all the time the star is devoting to this new profession. However, the passion for brush, palette and canvas is nothing new: Stone already loved to dabble in this art some time ago, but now that hobby has (perhaps) also become a business.

On Monday, Nov. 21, she shared a series of images on Instagram of herself at work, painting a large canvas in vibrant colors.
“Welcome to my studio,” wrote Sharon Stone in the caption accompanying the shots.

The actress, painter and mother of three wore a white shirt, black shorts and socks, this is her outfit since painter.
The images were posted on Instagram. You can look at the photos and video shared by Sharon Stone on her IG profile in the posts at the bottom of this article.

The room shown by Stone on Instagram is very large, characterized by high ceilings. Behind her is a table with several cans of paint, as well as various tissues and brushes.
After sharing a series of shots, she also posted a video where we see her at work and where she shows various works.

However, this is not the first time that Sharon Stone shows off her art on canvas: the star has documented her painting skills throughout the year, often posting her creations. For example a painting you titled Blue was introduced to his many followers (3.5 million) months ago.

As early as March 2021, he had shown the progress he had made on a watercolor painting he was working on, a work he had already told his followers about in the Stories.
And he anticipated at the time that he would like to try his hand at the hobby on a larger scale. The next day she showed her complete artwork of her, revealing that she used not paint brushes but makeup brushes…

The legendary Hollywood actress called that piece Mother Earthin perfect harmony with the subject: a detail of the sky with rolling hills and a rocky terrain.
She also thanked cosmetics brand Iconic London for their brushes. “Okay, now I’m really done with it. Done: Mother Earth. […] I would like to thank Iconic London makeup brushes. I used them on this painting.”

The message addressed to followers: “Always ask for a second medical opinion”

These new posts dedicated to her art come weeks after Sharon Stone encouraged her followers to always seek a second medical opinion, after claiming she was found to have a “large fibroid tumor” after a previous medical misdiagnosis.

In early November the star posted a personal message on IG about her health, saying she “just had another misdiagnosis and a bad procedure” and opted for “a double epidural” to treat the pain.

The Oscar nominee said that because of the “worsening pain” she asked for a second medical opinion. In doing so she was revealed to have “a large fibroid tumor” that needs to be taken out. So she advised her 3.5 million followers: “Women especially: don’t miss out (“ a second opinion ). ASK FOR A SECOND OPINION. It can save your life.”

Sharon Stone later said that it would take about 4-6 weeks for full recovery and thanked fans for their concern, adding, “Everything is fine.”
The actress of silver he had already spoken publicly about his health problems: in his 2021 autobiography, The Beauty of Living Twice, wrote that benign tumors were removed from his body. She described them as “gigantic”: “Bigger than my breasts”, these were her words. And she agreed to breast reconstruction surgery after the tumors were removed.

Sadly Sharon Stone has a long history of health issues.
He dealt with a stroke and a brain hemorrhage in 2001 when he was 43 years old.

Appearing at Today Show in March of 2021, she detailed those critical moments, when she was hospitalized and a doctor told her she almost died. “The room was so quiet,” Stone said in 2021. “When the room is so quiet and no one is running around trying to fix you, that’s when you realize how close death is and how serious everything is.”

Sharon Stone has thankfully recovered from her 2001 stroke and brain hemorrhage, though she said it took her about seven years to fully recover.
He further stated that those health issues had a major impact on his career. The stroke impacted the way she was treated by others. “People have treated me in a brutally rude way,” she revealed to variety in 2019. She added, “I had to mortgage my house. I lost everything I had. I have lost my place in the company. I was the hottest movie star, you know? Lady Diana and I were so famous – and she died and I had a stroke. And we have been forgotten”, these are the words of Stone released to the US magazine.

Below you can look at the photos and video shared by Sharon Stone on her IG profile.