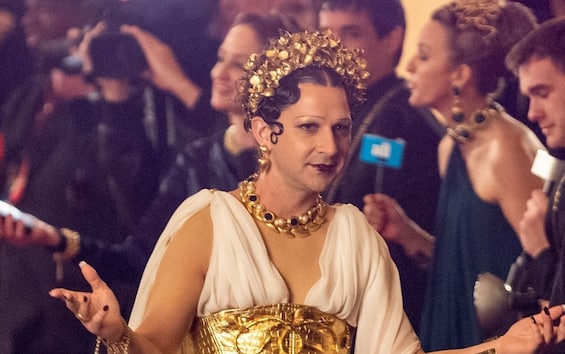 “Shia LaBeouf Wears Long Flowy Dress, Makeup, and Sky-High Heels While Filming Francis Ford Coppola’s Next Movie Megalopolis alongside Chloe Fineman, Isabelle Kusman and Jon Voight, among others” this reads the caption of Just Jared’s Instagram post which shows Hollywood’s most talked about actor playing an eccentric character from Megalopolis. Francis Ford Coppola, in fact, is shooting his new film these days around which there is a lot of interest from the media and the public.

Megalopolis: what the film is about

The official plot of the film reads as follows: A woman is torn between her loyalty to two men. But not just two men. Every man carries with him a philosophical principle. One of her is her father, who raised her, she taught her Latin when she was little and she believes in a very classic view of society, the Marcus Aurelius of the situation. The other, who is her lover, is her father’s enemy and has a more progressive vision, like “Let’s leap into the future, let’s get rid of this rubbish that has contaminated humanity for 10,000 years. We discover what we really are, which is an enlightened, friendly, joyful species.

Filming of Megalopolis is underway in Atlanta and will continue until March 2023. Coppola is also writing the script in addition to directing the film, but has chosen to produce it independently with a budget of around 120 million, despite the stellar names of the cast . Among these Shia LaBeouf who appeared on the web in some shots stolen on the set as a Greek goddess. “The fate of Rome hangs over a modern world unable to solve its social problems in this epic story of political ambition, genius and conflicting interests,” said Coppola trying to explain his vision for the film for which he sold part of his empire winery.