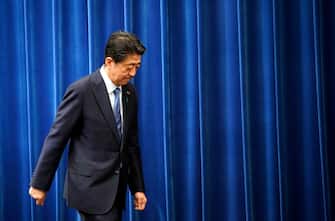 He was the longest-serving Japanese prime minister eversurpassing Eisaku Sato’s (his great-uncle) record of 2,798 days without interruption: Shinzo Abe was at the helm of Japan for years, until his resignation in August 2020, due to health problems. On July 8, 2022, he was shot during a rally and his condition is very serious

Abe was born on September 21, 1954. Graduated in political science, he comes elected in the first boarding school of the prefecture of Yamaguchi in 1993, following the death of his father, which occurred two years earlier. From 1999 he will become director of the social affairs division

Start one political career which will lead him to lead his country. From 2000 to 2003 he was deputy secretary of the government during the mandates of Mori and Koizumi with the Liberal Democratic party

Abe first resigned on September 12, 2007, following the defeat of his party in the upper house elections. And then will be re-elected for a second term in 2012 (in the picture)holding the office for two years

And then on 28 August 2020, at the press conference, Abe announces his resignation as premier: “My current state of health, following the recent checks does not allow me to focus on the most important issues concerning the government, and that is why I intend to step aside.” He has suffered from ulcerative colitis since he was a boy

During the pandemic, before the resignation, Abe had to cope the health emergency in Japan And freeze the Tokyo 2020 Olympic Games which then took place the following year

On July 8, 2022, the former Japanese prime minister collapsed to the ground during a speech in Nara, central Japan, after being shot. According to investigators’ reconstructions, Abe was hit in the back by two shots fired at close range, three seconds from each other. One man, the alleged bomber, was arrested. Abe’s conditions immediately appeared very serious. In the photo, the area where Abe was shot