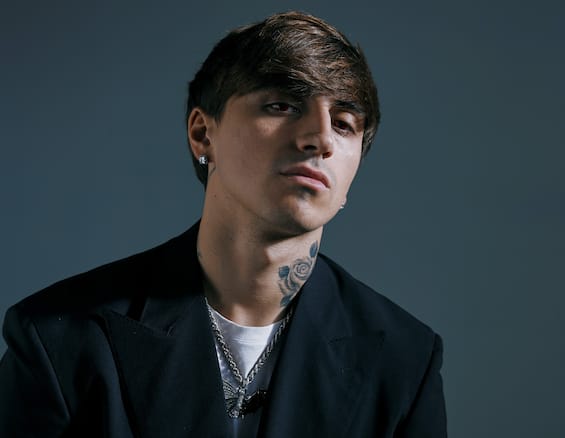 A constant and continuous creative spirit, hours and hours spent in his studio, many and new bases created, so as to lead him to publish the deluxe version of “X2”, his debut album, with songs created with historical friends but also new artists , with whom he had wanted to collaborate for some time. Sick Luke, one of the most visionary and influential producers of contemporary music (no, not just trap) never stops creating new tracks. It’s stronger than him. “But I’ll try to take some time before releasing something new, Teseo, my first child, will soon be born, and I want to dedicate myself to him and to be a dad. I can’t wait for it, it won’t be long ”he says smiling and proud of his new“ hit ”. Yes, because Sick Luke has made many hits, and he will certainly make many more, but becoming a dad is certainly an important and exciting milestone. Who knows if there’s already a Sick Luke-style lullaby, I ask him: “Yes, when I found out I made a special beat” he admits happily.

X2 Deluxe, between tracks with old friends and new artists

Our conversation starts from this wonderful news, but not only. Because there’s other great news: “X2 Deluxe” was released on Friday 2 December, an enriched version of his first album, a new release dictated precisely by the need to release music with artists who hadn’t participated in the first version of the album. “Everything stems from the need to release tracks with artists not featured on the album released on January 7 of this year, but also to release heavy trap songs, a style that he has always defined for me” Luke tells us. An album in which historical friends such as Tony Effe and Side also participate: “For me, including them was a must, they are two artists with whom I have always worked since the beginning, since 2016. Who better to trap than them? On the disc they are present in Mary Poppin and La casa di Dio”.

In this record, however, there are not only historical trap voices, but also artists such as Bresh and Mara Sattei, with whom Sick Luke had always had the desire to collaborate. And this happened with the song “Empty inside”: “I’ve wanted to collaborate with them for a long time, but we weren’t able to do it for the album, as indeed for Massimo Garanzia and Paky, who instead are in this deluxe version. Empty inside, song with vocals from Mara and Bresh, seemed like the best way out, again. It’s a song that takes up some of the sounds of Moth, Crazy Dreams And The Witch of the Orchard. It was the perfect way to tie it all together. Maybe I would have immediately come out trap, heavy, and the whole process would not have been understood”.

At Music Week Sick Luke told himself to many guys who flocked to hear his experience, and he admitted to having a dream artist with whom he would like to collaborate, but we’ll talk about that later. In our chat, however, let’s start again from this intense year, which led him to travel often throughout Italy for new collaborations: “With the Deluxe, a circle closes. Now I’m going to take some time to be a dad, to make music on my own. I’ll take it easy, try not to spend too much time in the studio. But I already dedicated a beat to Theseus!”

A book, the affection and esteem for the father, a point of reference always and forever

Between beats and collaborations, however, Luke has also found the time to write his first book “Here it doesn’t rain anymore – Story of a producer” in which he tells himself with an open heart and describes everything that has happened in his life, personal and professional. Between the pages there is a constant: the affection and esteem for his father, Duke Montana, a point of reference always and forever, who has never stopped believing in Luke’s qualities. And he has always done everything possible so that Luke could live his passion for him. Telling yourself is not easy. But Luke did it: “In some moments it was a bit heavy and remembering all those moments, rereading them I even started crying. I’m not a tragic person, but thinking above all of certain things I’ve experienced made me reflect and say: Did all this really happen to me? But even when they happened to me, I did mine and moved on. I think it’s right that people know my story today: I’m a rather shy person, but it’s nice for those who have been following me for a long time to know even more sides of me, and not just the artistic one “

“I recently discovered, thanks to Spotify Wrapped, that there are those who have listened Crazy dreams 300 times in one day. Crazy stuff that has never happened to me before. It’s a really nice effect, it’s cool,” admits Luke. “With the Deluxe there’s new music, before releasing more I’ll take some time to find new stimuli and sounds, but with this Deluxe I’m finally 100% satisfied. Maybe it’s also an opportunity for those who haven’t listened to X2 to hear the whole project… I leave it to everyone!”

Sick Luke, Trailblazer of trap and the importance of always experimenting

Sick Luke has broken many barriers in music, and not just trap music: “Yes, it’s true. Usually the producer was invisible, he almost didn’t have a face…I managed to overcome this obstacle, if I produced a song boss who is me, also thanks to the initial “Sick Luke Sick Luke”, there is my brand” admits Luke. “I think it’s important to keep experimenting, and that’s what I’ve always done and will continue to do.” And who would like to experience Sick Luke with, is there a dream artist you would like to collaborate with?, I ask him.

The answer comes without any hesitation: “With Post Malone!” Luke says. “Post Malone is one of the strongest, eclectic, varies on everything. Every record he makes is different, he’s a true artist. I’m not one either, I’m a bit like him, precisely because I like to experiment, find new sounds and styles. And then he’s spontaneous, transparent, just like me. I’ve always been like this, from day zero. Like the rest of the Dark Polo Gang: we’ve always been transparent. We find new ways to talk, and dialogue, but that’s how we are “.

“But will there ever be a return of DPG?” I ask him curiously. “Who knows, if there’s a good economic project … never say never” Luke replies smiling. Meanwhile, we are enjoying his new music, recently released. Then, everything that arrives will certainly be beautiful and innovative. Like the unmistakable style of Sick Luke – Sick Luke.