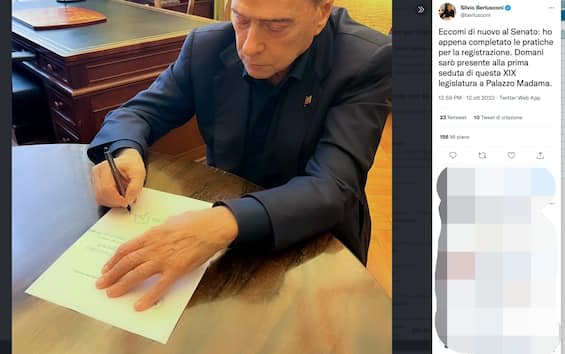 The former premier completed the registration procedures at Palazzo Madama in the late morning. And she confirmed with a tweet that tomorrow she will be present in the Chamber at the first session of the nascent 19th legislature. Berlusconi has been absent in Parliament since 2013 when Severino had suffered forfeiture as a senator under the law

In the late morning of 12 October Silvio Berlusconi, leader of Forza Italia, arrived at Palazzo Madama to register for the first session of the House scheduled for tomorrow. The former premier was welcomed by the parent company of FI in the Senate, Anna Maria Bernini. For Berlusconi (LA FOTOSTORIA) it is a return to Palazzo Madama nine years after his decadence as a senator in 2013. With a tweet (and a photo) he confirmed that he had completed the registration procedures. “Tomorrow I will be present at the first session of this XIX legislature at Palazzo Madama”, wrote the president of Forza Italia (TOWARDS THE NEW GOVERNMENT: THE SPECIAL – THE UPDATES).

In 2013 Berlusconi, following the final conviction in the Mediaset trial for tax fraud, suffered the forfeiture of his post as senator for the Severino law. On November 27 of that year the Senate validated Berlusconi’s forfeiture as a senator and his exclusion from political life was envisaged for six years. The incandiability lasted until 2019: in that year he was elected MEP. Now, in the political elections of 25 September 2022 he was elected to the Senate in the single-member constituency Lombardia 06 (Monza).

Meanwhile, yesterday it was the turn of Marta Fascina, Silvio Berlusconi’s partner, in carrying out the accreditation procedures, in her case those of the deputies to the Chamber, in view of the start of the new legislature. Black suit and headband, sports shoes, she said she was “an emotion”.