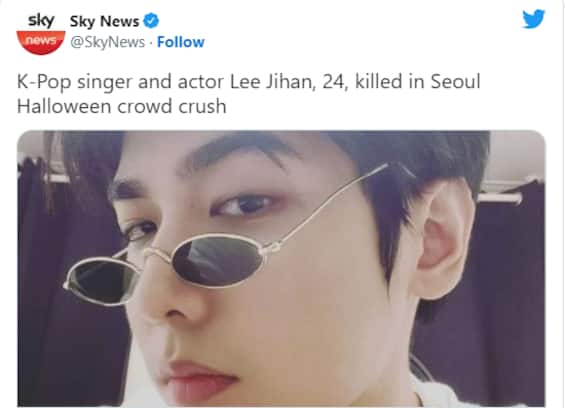 Among the victims of the Halloween massacre that took place Saturday night in Itaewon, Seoul, where the mob killed 154 people, there is also the actor and K-Pop star Lee Jihan.
Jihan, 24, according to local TV, had become famous thanks to a South Korean singing competition, before becoming successful in the world of acting. The two agencies representing the star – 935 Entertainment and 9Auto Entertainment – confirmed the news of his death on Sunday, Sky News writes. Posting a black photo as a sign of mourning on Instagram, they wrote that they were “heartbroken” over his death and told fans that Jihan “has become a star in the sky”. Jihan found fame on South Korean reality show Produce 101 in 2017, where 101 K-pop wannabes vied to win a seat in an 11-member boy band. Although he was not cast in the final band, Jihan used the platform to transition into acting, starring in the South Korean drama “Today Was Another Nam Hyun Day”. According to AllKPop, Ji Han’s funeral will be held on November 1st.

Seoul residents are calling for an investigation into the incident

Meanwhile, the demand in South Korea for investigations to clarify the responsibilities of the massacre is increasing, and the pressure on the police is also increasing for the gaps in crowd control. About 100,000 people – mostly teenagers and 20s, many wearing Halloween costumes – poured into Itaewon’s winding streets on Saturday, with eyewitnesses describing poor security and control. The police, which began examining the images filmed by security cameras, said today at a press conference that they had deployed 137 officers at the event, more than in previous years: the media, however, remarked that their task was largely against drug use.