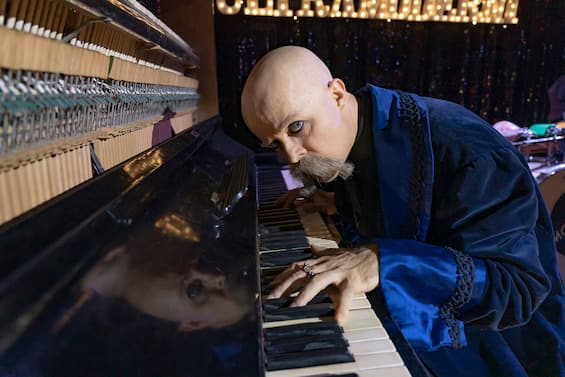 Summer Christmas (Follia del Brasil) – Madame De Freitas and Sior Mirkaccio
A Christmas samba, written by me for the Brazilian sciantosa Madame De Freitas for the Christmas show of La Conventicola Degli ULTRAMODERNI in Rome. Have you ever thought that on the other side of the world Christmas falls in the summer? When Madame De Freitas made me think about it, I immediately wrote this song. There’s even a cartoon video floating around the net. Perfect for making the train and warming up the

Christmas for adults and children!

Alle B. Goode and the Bone-Breakers are a band of rockers from Brescia. This song was written this year by Alessandro Favero, who has always loved the Christmas repertoire, and accompanied by a nice video clip. Rock’n’Roll!

The most beautiful Christmas opera ever written. A famous ballet with very catchy and original music, all very famous, different from each other, each with its own world of sounds and choreography. Soundtrack to every Christmas from 1892 to today!

I’ve got my love to keep me warm – Billie Holiday

I’ve listened to this song hundreds of times. Composed by Irving Berlin, also author of White Christmas, it is a very original song from the construction point of view. Billie Holiday manages to give the song all the melancholy she requires, with a very refined swing given by the juxtaposition with the orchestra. I also recommend listening to the slightly earlier version of Mildred Bailey and feeling the qualities and

the differences between the two vocal and instrumental interpretations.

White Christmas – The Drifters
A fun 1954 doo-wop version of this immortal hit written by Irving Berlin for Bing Crosby in 1950. The Drifters are among the most famous black American vocal groups of the 1950s and 60s. In those years there was a great ferment of this genre which was also performed in the streets of the black neighborhoods of New York and Chicago, singing around bonfires to chase away the cold.

One of the fathers of Rock’n’Roll and Rhythm & Blues dedicates a song to Rudolph, Santa’s reindeer. A little rhythm to dance at the right time! May he bring an electric guitar to anyone who wants one!

If I Can Dream – Elvis Presley
Elvis learned this song overnight and sang it the next day on NBC’s 1968 Christmas special. A closing Christmas song had been requested by the sponsors, but Elvis decided to indulge those who suggested he get around that request by singing an original song, and bringing a song that spoke of social rights and hopes for peace.

White Christmas – Charlie Parker
I suggest listening to this version of the saxophonist father of Be-Bop to understand his improvisational style. Through a simple and known piece it is easier to follow Parker’s inventions and marvel at so much creativity in designing melodies so detached from the original one. For a true Jazz Christmas!

An Italian classic from the 1920s in a sweetened version that is also enjoyable for today’s listener. At the end of the passage, we understand that the winter images so pleasantly described are experienced and dreamed of by an Alpine soldier who is about to sacrifice himself in defense of his homeland borders. Repertoire entirely from Caffè Concerto, initially written for Anna Fougez, queen of the Margherita Salon in Rome and Naples.

Country Western Christmas song from 1948. Tubb’s steel guitar, western fiddle, vocals and guitar make this the most yankee and yuletide can be sung around a roaring fireplace.