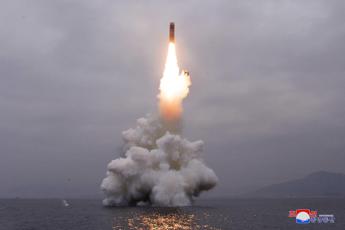 The sinologist explains that Beijing could bring Pyongyang to the negotiating table, but he wants a profit. Meanwhile, the situation is becoming increasingly dangerous, even with respect to the Russian nuclear threat.

” The escalation around North Korea ”, the fact that it is ” launching missiles as perhaps never before in its history ” are proof that Pyongyang ” is upping the stakes of blackmail, perhaps it thinks its time has come ” ‘. The right moment, first of all, “to blackmail America with new demands”, because “he probably considers it weakened as it is already engaged on the Ukrainian front”. The result is “an extremely dangerous situation”, even “more dangerous than that coming from the Russian nuclear threat”. With China standing by and that, to intervene, ” wants something in return from America ”. Francesco Sisci, a sinologist and profound connoisseur of Asian dynamics, explains this to Adnkronos, according to whom ” North Korea is much more volatile ” than Putin’s Russia, where ” there is a complex decision-making system, a diversified power. In North Korea, however, Kim jong un and his sister decide everything. So from the point of view of escalation, the situation on the Korean peninsula is much more dangerous ”.


Sisci also points out that ” Korea and Japan are among the top 7, 8 economies in the world. A nuclear war there, an explosion of tension would mean an economic crisis of dimensions that are difficult to calculate ”.

But if for Pyongyang “perhaps this is the right moment to blackmail America with new demands”, for the United States “even more so at this moment we cannot accept” and we must “resist”. Because otherwise ” it would mean giving in to the worst blackmail, the biggest threat ”, to a North Korea that appears to be ” unscrupulous and blackmails in times of difficulty ”.

A role, at this point, perhaps China should play, bringing North Korea back to the negotiating table. “I think he hesitates to do so because, just like in the Ukrainian crisis, he would like to get something in return from America,” explains Sisci. Therefore, it is not enough to move towards “the right thing to do, the peace that is good for everyone” as Washington wants, for Beijing a more precise advantage is needed. All this while ” the tension is very high ” and therefore ” it is very easy to lose control ”.