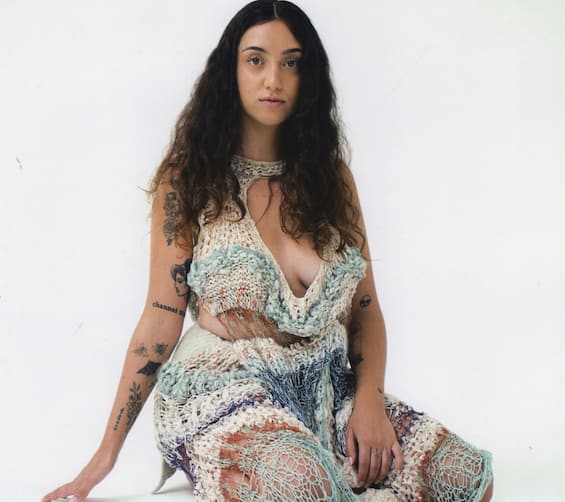 Spending time with an artist and being led into her world, made up of passions, principles and even some fears is a privilege that happens to few, and with few. It happened to me a few days ago when I met Sissi. And I’m not saying this because she was born under the sign of Pisces like me and, just like yours truly, she has a constant veil of melancholy running through her thoughts. Maybe these aspects (which I only discovered during our chat) helped us get closer, sure. But they weren’t the determining factor in our meeting. No, because Sissi, in addition to having a beautiful smile (which lights up her face when she talks about her music) is a welcoming artist.

It welcomes your curiosities, makes them its own and shares part of that world in its head. This natural acceptance of his, linked to his extraordinary willingness to devote all the time necessary to what he does, makes everything easier. Time flies. You find yourself talking about music, about projects also marked by the choice of “the right words to describe an emotion”, because if you don’t have the correct term, music suffers. And also the voice, yes beautiful but above all pulsating, that Sissi has. I asked her about her next live in Milan on November 21st. But beware: we didn’t talk about Sanremo, nor about relationships. Or rather: we talked about passions and the relationship with music, which for Sissi is and will always be an infinite love. Many things struck me about this young artist. My wish is that they are the same ones that will affect you too.

Perfectionist, careful, beautiful (inside and out)

Perfectionist, attentive, beautiful (inside and out): if I were asked to describe Sissi I would use these three adjectives. To which I would also add intimacy, one of the dimensions that best represent it. A young artist we met through her voice, beautiful. Which, however, she is a double-edged sword: “I’m delighted when they tell me that my voice is beautiful and I’m very good. But having a voice like mine has pros and cons, because it’s always the first thing you notice. For example: I adore Yebba, a singer who in my opinion has a beautiful voice. If I ever had to meet her I would tell her: you excite me, you make me cry, you don’t just have a beautiful voice. However, I would not want her to pass the message “Sissi doesn’t want her to be told that she has a beautiful voice”. Absolutely no! When someone stops me and says that my songs have been the soundtrack of important moments, of strong emotions… I’m just happy. There are those who already do it, and when I hear their words I am satisfied with my work”.

Training, reference artists, passion for jazz and rhythm and blues

I was struck not only by Sissi’s voice, but above all by her story and her unconditional passion for very good artists, even a little tormented, but of infinite sensitivity. Not only performers, attention: just like she is, singer and author, who day after day tries to put into her songs all the emotions she feels in her everyday life. I remember one day I watched a video in which she recounted her artistic love for Amy Winehouse, an unforgettable British artist who combined soul, rhythm and blues and jazz in her music. Tormented but very sensitive. And in her being aesthetically frail, she hid a world of incredible nuances. With Sissi we start talking about Amy, who passed away in July 2011, but capable of leaving us albums that are little jewels to keep. I ask Sissi: each of us takes from the artists who inspire us what he wants to make his own. What did you take from her and make it yours? (before I start to answer, when you hear the name Amy Winehouse Sissi’s face and smile light up, and it’s beautiful)

“I was very young the first time I heard it, and it was thanks to my aunt, who had bought the album ‘Frank’. As I listened to her voice I said to myself: wow, she’s really telling me something, way beyond the song. Although I didn’t understand the meaning of her lyrics, which I later understood when I learned English well a few years later. Despite the obstacle of understanding, her voice so black, her timbre conveyed her vulnerability to me. And hearing her voice I felt like I was having a flashback to the Sixties, to the Motown period… but with a beautiful contemporaneity. Over time, I read her lyrics and I understood that she had managed to put into music the things one is most ashamed of or perhaps one does not want to say, especially in human relationships. And that means a lot to me too. I started writing songs in English because I was a bit ashamed of what I thought, because I never had the chance to talk to someone who really understood me. But I’m Italian, slowly I started writing in Italian, even if I still have some difficulty finding the right words in my alanguage, precisely those words that often sound better in English and that I try to make Italian”. And if you don’t find the right one that suits you… what do you do? “I try to find another one, keeping the same meaning, even if it’s not easy. The lyrics should flow, shouldn’t jam, and I shouldn’t have a hard time singing that song. If it’s a text that’s wrong, I feel it right when I try to sing it… it’s something that goes far beyond words”.

I ask her if she has ever received proposals for beautiful songs that “worn” were bad for her. And Sissi tells me: “Yes, it has happened to me many times that I have wonderful songs, but that I simply didn’t feel mine. But singing them didn’t make me feel calm. I know I have precise tastes, which sometimes are perhaps not understood. Some people tell me that the genre I want to do in Italy has never worked, but it’s the one I’ve always interpreted, loved and made my own. I have very clear ideas about this. That’s why after the experience of “Friends” I wanted to spend some time choosing the right lyrics and melodies, without rushing and rushing to create something that didn’t reflect me. I want to make an album to be proud of, to put my head and my heart into”.

When Sissi tells me this, I think that taking time out, in a musical world that goes very fast, where new songs are released every day all over the world, takes a lot of courage. And it doesn’t have to be easy. We talk about it together and she rightly tells me: “I always reflect a lot, I listen to the advice of others, I am sensitive and I know how it feels when you accept something that doesn’t make you feel good. And even though she makes me a little anxious about not moving forward, at the same time I know that I want to be proud of myself and my work, and create an album where I am. Here: I want to stay true to myself”

Live on November 21st in Milan

Sissi will be in concert on Monday 21 November at the Arci Bellezza in Milan. But what can we expect from this concert? “My songs, some covers and guests. But I won’t say who will be with me, I’ll leave a little curiosity. I can only say that the artists with whom I will share the stage are wonderful people, whom I respect and have known for a long time. I’ll do the cover of Yebba’s Heartbreak, but I don’t say with whom! I love the acoustic very much, I want everyone to experience how I feel inside when I sing these melodies. I enjoy live because I always change everything, I improvise with my voice. Ale, my keyboardist, and I understand each other immediately: he too loves soul and R&B music, so we improvise and play with my voice. I can’t wait, then the intimate dimensions reflect me a lot”.

I picture Sissi on stage at some jazz club in New York or Los Angeles and ask her where she would like to sing. She looks at me smiling and says: “There are so many magical places where I would like to have a concert. Definitely at the Blue Note, where I’ve been many times with my mom and I’ve seen many artists live, including Take 6. My whole family is passionate about R&B music. Then who knows, even Madison Square Garden, or those so intimate American theaters”. Maybe Sissi will be the first soul and R&B artist to play a concert in stadiums (I sincerely wish her so), so much so that she will be able to break the barriers that still somewhat exist on this type of music.

“You know, I’m very scared to have a label and stick to only one type of music. Let me explain: if we look at US artists we don’t think of them as part of the rap or soul genre. We love them because they are identifiable. I think of Kendrick Lamar, or Steve Lacy, who I’ve been listening to for a very long time. And that’s what I want to do with my music too: to be loved and listened to for my musical identity, for what I express. Even though I know there will always be R&B in my music, that’s me and always will be.”

We greet each other with a hug, I really wish Sissi the best, because staying true to yourself today is not a foregone conclusion. And that makes it”more than special“.