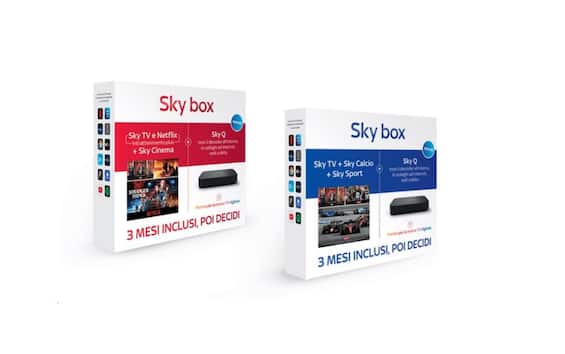 The Sky offer expands with Sky Box (DISCOVER THE OFFERS ON THE OFFICIAL SKY BOX WEBSITE). Dedicated to new customers, it allows you to see three months of Sky programs for the total price of 39 euros. There are two proposals: one for those who love cinema, shows and TV series and the other for fans of football and sport in general. The Sky Q Internet decoder is included in the box and is granted on free loan (THE SKY BOX GUIDE).

Sky Box for those who love TV series and cinema

Sky Box offers the possibility to watch Sky TV and Netflix (Entertainment plus) together with Sky Cinema. Shows, TV series, Sky documentaries and the Netflix schedule will all be on the Sky Q home, together with over 200 first-runs a year of Sky Cinema, for whose customers Paramount+ (valued at 7.99 euros a month) is without additional costs. Netflix is ​​included in Sky Box in the Standard plan, HD 1080p, for viewing on 2 screens at the same time, without commercial breaks. Those who already have an active Netflix account will have to associate it with Entertainment plus, without having to cancel the current subscription. Once the activation of Entertainment plus is complete, the payment method used will be interrupted: for three months the cost of Netflix is ​​included in the Sky Box promotional code, while from the fourth month the cost will be moved to the Sky invoice, under the Entertainment conditions plus.

What the Sky Box offer includes for sports lovers

Where to buy and how to use Sky Box

Sky Box can be purchased in the best electronics stores (MediaWorld, Unieuro, Euronics, Trony, Expert) and online. To use it, you must then install the Sky Q decoder and activate the promotional code. To do this, simply call the free number 800 186 001 and follow the instructions of the operators.